Okay, so I’ve had a zillion reminders to myself saying “You should post something.” I’ve been hellabusy but since when is that news? You can see that for yourself if you follow me on Twitter (@lizdanforth).

World of Warcraft
One thing I don’t get into a lot on Twitter is my World of Warcraft gaming. For one, while there’s an avid group of fellow WoW geeks among my followers, many people could completely care less. When I attended Blizzcon, tweeting my fool head off, I lost a couple hundred followers more interested in my library stuff, or my gaming advocacy stuff. I mention WoW , certainly: getting the Quel’Delar a week or so ago wasn’t something I could fail to squee about. I could try to express my awe that my guild (with friends) brought down Lady Deathwhisper on our first try, without a wipe — on a run when we didn’t even think we could necessarily take out Lord Marrowgar. My people have shown so damn much heart and determination to excel that I am proud and deeply humbled to be their guild master and occasional raid leader. We are a casual group of friends, and never seriously thought we could raid in WoW. We do have real lives outside the game — and achievements in the real world mean more to most of us than game achievements. 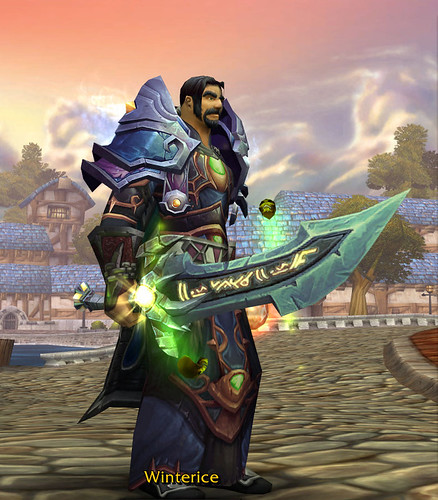 Even so, doing something that takes study, work, effort, teamwork even if it only involves pixels, is not without note. It’s something to be proud of. My research on WoW, the stuff I talked about at AzLA last December (my previous post here), showed in hard numbers how important the sense of community and collaborative effort can be. It is “just a game” but the ties that bind us together in the game make it more than “just a game.” It’s been said that “raiding is a team sport” and I agree. Maybe it’s the geek’s version of team sports, something many of us were not able to engage in when we were 8 and 10 and 15. I know I was the person picked last on the schoolyard, and my new team mates groaned when I walked over to join their side. It didn’t matter how hard I tried, I was never more than mediocre at sports. (How fitting — or is that ironic? — that I write this as the Winter Olympics are being played!) This game, though, is something I can be more than mediocre at. It is more than a game.

On the Value of Games
And here’s my gaming advocacy rising to the fore, and not just about WoW. Today I stumbled on a LiveJournal blogger, sashabilton who had some nice things to say about my artwork in Tunnels & Trolls, work I did (urk!!) thirty years ago. As a youngster challenged by dyslexia or perhaps ADHD, Sasha speaks of being sufficiently motivated by my artwork in T&T to push through the difficulties in order to read the game books, the solitaire adventures. From the substantial size and substance of the post recounting his(?) history travelling through the world of games and gaming, literacy issues have evidently been overcome. Emphatically.

And reading that post awes me more than anything else that’s happened to me in a very long time. I know my artwork, my co-writing/editing of T&T’s 5th Edition gave a lot of people diversion and entertainment. I have had people tell me that my art in the Magic cards was part of what brought father and son together with a shared interest, mother and daughter together to play games with each other. But the idea that my pictures — in a game — helped someone unlock their mind and enter the world of words and literacy… now that is an Accomplishment. I didn’t do the unlocking … only Sasha could do that … but I am so profoundly and deeply glad that something I did put the key in his hand.

Let no one tell you that games and gaming can’t make a difference.

One Reply to “On the Nature of Accomplishments”