What Am I Doing?

It’s all very well to talk about big-picture plans. Moreover, big-picture blog posts are popular at the end of the year, but I’m feeling contrary. On this last day of 2010 (which I won’t be sad to see the tail end of), perhaps you’d like a gander at what I am actually doing right now?

At this very moment, I’m writing a blog post (d’uh) but more generally, I’m trying to work on this website a bit, much of it behind the scenes. It’s infrastructure and I hate that it doesn’t seem productive in the slightest. I’d like to set up a page detailing all my card art, and I’d like the Galleries better organized and looking nicer. I’m scanning tons of work. I’m struggling to figure out MailChimp so you can subscribe to updates via email, if you like, for those who don’t like RSS readers. (I don’t, personally.) I’m largely self-teaching this old dog many new tricks, and it’s going slowly.

Art Projects
I suspect many of you are most interested in my artwork, though. It’s what I’m best known for, certainly, and I do have a few things that are pulling me to the art table.

For quite awhile I’ve been tinkering with about a dozen new illustrations for a new French edition of Tunnels & Trolls. That project got put on the backburner once it was half-complete, and the black & white version of the “courtly mage” I mentioned in last week’s post “Starting with WHY” was created for that book. Steve Crompton colorized it for the Origins poker deck for 2010, put out by Flying Buffalo. Finishing up the French T&T project is my first art priority.

For those interested, these are the cards I had in the three years of Origins decks. The 2008 deck has a photograph OF me, as opposed to artwork created BY me, and I wish I still looked like that. (It was an old picture!) The 2009 picture has a painting that, for reasons lost to my memory, was commissioned but never printed, so far as I know. The mage adorns the 2010 card. I have a limited number of these cards available for sale individually, if you care to contact me directly.

A Sekrit Project
I have a Sekrit Project that is also sending me to the art table. It consists of numerous smaller pieces that I can work on here and there when I have a small wedge of time. On a library workday, I often eat lunch in the nearby park where I’ll sketch for a short time when I’m done eating. Sometimes a scowly, scrawly face like this results: 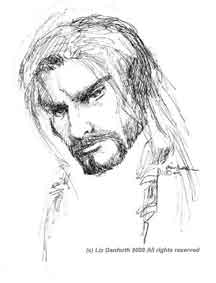 I might turn that into something more finished, or maybe not. I’d change almost everything but the expression, which is what I like about it, so it seems just as reasonable to do a new piece intended for inks right from the start, meant to end in a finished, polished final result. We’ll see.

Creative Doodling
Mostly, the Sekrit Project works begin as doodles that get out of control, though, because this project is an Artiste’s dream and an Illustrator’s nightmare. In the post “Starting with WHY,” I already said I am not a pure Artiste. In this case, this project means I am just pulling this concept or that out of my… er, brain… and trying it on for size. It’s a bit unsatisfying.

You’d think it would be the most creative, right? Um, no. For me, it gets a bit random (“Oh look, a chicken!”). Or it’s snarky (“Everyone loves dragons.”) Or it’s repetitive. (“Faces. I like drawing faces.”) I prefer assignments I can grab onto and run with, because that’s where my creative problem-solving abilities rear their beautifully-ugly hydra heads.

A Brief Digression
Illustration vs Arte has a long conflicted history because of the perception that, if you’re doing work to fit someone else’s vision, you’re somehow less creative than if you’re pulling work completely out of your… er, brain. I respectfully disagree. I pull out all the stops when challenged to do an illustration, and try my best to open that vision-door I mentioned last week. The seed that inspires can come from anywhere, inside or outside. It’s art if you put your whole heart and soul into it, and it’s Art if it lasts 100 years and people still respond. I don’t expect to be around 100 years from now, so worrying about whether what I do is “Art”? That is moot.

I seek out inspiration from anywhere, inside or out. I endeavor to put my heart and soul into what I do. If I occasionally start with the random, the snarky, or the repetitive, I try to rachet it up a notch, have fun with it, entertain myself and in the process do something that entertains others. I am willing to let the chips fall where they may a century from now.

Other Projects
I have a handful of other projects in various stages of completion, some commissioned and some not. I have a couple of editing/development projects lurking in the wings, and a chapter to write about MMOs in libraries for a colleague’s book. I have three sculptures begun, one of which is that murloc mentioned in the previous post.

Cards
But for the next several hours, I’m going to go sign cards. As I say on my FAQ Page, signing cards is not a priority and cannot be. Given what I wrote above, you can see why. I get to it when I can. Right now, I have a lot of card requests that have piled up, though, and I’d like to get my decks cleared to start the new year.

So, speaking of which: I wish you the very best in the coming year! May 2011 be kinder to us all than was 2010, and each year after better than any year before.

This entry was posted on Friday, December 31st, 2010 at 10:04 am and is filed under Art, Musings, Site, Writing. You can follow any responses to this entry through the RSS 2.0 feed. Both comments and pings are currently closed.

One Response to What Am I Doing?