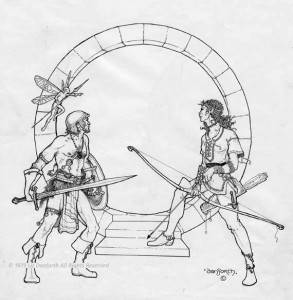 I PROMISED TO post up another piece of old art for sale when I wrote about “The Summoner” last week. I thought I would get it up in a day or two, but it took a little longer.

If it’s true that, as I said, some pictures “ask you to delve into them,” then this is one of those. Still, you must prod your imagination for this one.

Today’s piece — I call it “Into the Tunnels” — offers few of the hooks present in “The Summoner.” Here, the mystery is just an opening, a portal, a moongate. The characters are poised, weapons drawn and ready, and the fairy is pointing at… something.

But exactly what’s beyond? That’s for you to decide.

INTO THE TUNNELS
This artwork, available now on eBay as promised, does not have the storied history of some other works I’ve offered. It was published on the cover of the first boxed set, the hard-to-find black and gold box. As published, the delvers DO have somewhere to look forward to exploring — they are looking into a stalactite-laden cavern. Lying out there in the open, unattended, is a glowy mound of treasure. Not a monster in sight but … surely they know it won’t be that easy.

That cavern was drawn as a separate piece of artwork, then fitted into the opening. I was so pleased with the main drawing of the delvers, I was scared to death to “ruin” it trying to make an image within. In 1979, which (as near as I can tell) is when this piece was done, I had a lot of confidence in my ability but it wasn’t at the point where I could be sure I could pull off everything I could imagine.

My work has always been very graphical, very designy — a reflection of the Art Nouveau-style of book illustration I learned to ink from. Aubrey Beardsley, Alphonse Mucha were effectively my mentors. Complex, multi-dimensional images posed a challenge for me.

In this case, I admit it — I blinked. By doing the other piece separately, if it didn’t work, I hadn’t ruined this original. I have to say that more complex scene never really did a lot for me. The cavern wasn’t “right” for the rest of the picture. “Into the Tunnels” might lack a certain something, the expectation that something more should be going on inside that gate, but I still like it just the way it is.

BLACK AND GOLD
The box the art went on was widely lauded as having real visual impact. Slick, shiny black paper with gold ink. In the days when RPG book covers were a riot of often garish color — the beautiful work of Parkinson, Elmore, and others was just beginning to be seen — the black and gold of the T&T box was very different from the rest of what was on the shelves. That was the point: simple, sharp, refined, and elegant. Classy.

It was also a one-color print job that the company could afford better than full four-color reproduction! WIN! As I recall, it was Ugly John Carver who came up with the idea, but we were all inordinately pleased with ourselves — and evidently the fans liked the box as well.

So if “The Summoner” original isn’t a piece to suit you (it is still available to be bid upon as I write this), perhaps you would like “Into the Tunnels” instead. It comes from the same time period, and if the stories that it comes with aren’t as elaborate, perhaps the moongate opens the doorway for your own stories to be told about where these three adventurers might be going.

After all, T&T always was about the stories you could make.

7 Replies to “Pictures Have Stories: Into the Tunnels”