At 4:30 in the morning yesterday, I logged into my World of Warcraft account. I am usually up at that hour (I actually got out of bed at 4am) but I almost never play games then — that is worktime for me. But this was a special circumstance: I was playing WoW to raise funds for the Texas Children’s Hospital.

I played a lot of WoW
I admit, I didn’t make it through all 24 hours of the one-day marathon. I logged out about midnight — a mere 19.5 hours playing pretty much non-stop. (I grabbed a quick shower about 2pm.) Mind you, that’s more than I usually play in the course of an entire week. And just for the record, 20hr/week is pretty normal for a WoW player, according to research done out of Queensland University of Technology. And before you squawk about “OMG that’s another half time job!”, consider how much time the average American spends watching television — a passive, non-social, and typically unchallenging medium. (For those not clicking the links: it’s 8 hours and 18 minutes a day for television, compared to less than 3 hours a day for 90% of the players in the study playing WoW — a number likewise reflected in my own research.)

I had a blast. Playing with the Libraries & Librarians guild of Aerie Peak, I spent most of the day playing my Death Knight Recalled. I ran with the guild’s co-GM Melvyl and fellow fundraiser Roszmairta into Hellfire Ramparts, the Blood Furnace, Scholomance, and Stratholme.

Children in WoW
I promised to do all the child-related quests I could get to. I put the doll parts back together for the lost and lonely ghost-child Pamela Redpath, I carried the child Alicia’s heartwrenching poem to her friend Caylee Dak up in Shattrath, and I retrieved the lost painting of Tirion Fordring’s family picturing happier times with his wife and son.

Friends in WoW
On and off throughout that day, I’d been on Ventrilo (a VoiP commonly used among gamers) chatting with the guild-folk I usually hang around with. These are almost entirely friends-in-real-life I play with, and many of them live here in Tucson. Some of them came by the house over the course of the day, bringing coffee and snacks and sandwiches, giving me hugs or shoulder massages, enormous amounts of moral support, and generally being thoroughly awesome friends. Five of them rolled up new toons on the Aerie Peak server to hang out with me in-game, and I ran my newbie paladin Zenodotus with them. We ended the night smacking Hogger around a few times. 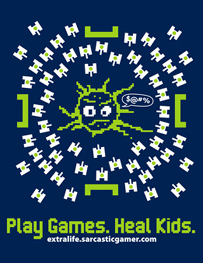 And in the end…
The ExtraLife event brought together 1800 gamers from around the world, and raised over $140,000 for the Texas Children’s Hospital at the time I am writing this. There will be more. Some of my people ponied up funds ahead of time (THANK YOU!) and some pledged to pay up afterward by the hours I played. I still intend to play those last 4.5 hours on Aerie Peak — Pamela’s ghost still needs to be re-united with her father, and Ahab Wheathoof’s dog is still running wild. Some gamers were unable to play yesterday and they will be playing next Saturday, the official “make up” day, or later this week. The charity is accepting funds through October 31st.

And that, my friends, was the whole point, after all.

Bookmark this on Delicious

This entry was posted on Sunday, October 18th, 2009 at 9:30 am and is filed under Charity, Gaming. You can follow any responses to this entry through the RSS 2.0 feed. Both comments and pings are currently closed.

One Response to Yesterday was awesome