Games are my hobby as much as part of my work, and I’ve played games regularly from as far back as I can remember. Originally it was bridge and cribbage and Go Fish and Oh-Wah-Ree with my family. I joined the hobby community in college, playing Risk, Diplomacy, and Tunnels & Trolls with the gamer crowd from the local science fiction club. My association with T&T, its designer Ken St. Andre, publisher Flying Buffalo, and the circle of good friends who helped develop that game ushered me into illustrating for and working in the games industry.

PLAYFUL
Basically, though, I just like to play games. Who I play with has always mattered as much as what game I’m playing. These days my game is World of Warcraft, a point I’ve mentioned a time … or two … before now.

I play quick and casual tabletop games when occasion presents, but I don’t really enjoy tabletop RPG campaigns any more. If I want to visit with friends IRL, I want to focus on them. Casual games allow that but nowadays I find the RPGs come larded with too much paper-shuffling. I’d rather hop straight into a game session online and let the computer handle the annoying mechanics while I say hello to my chums and catch up. (YMMV and that’s cool by me. Different strokes.)

PLAYING WoW
I got into WoW for professional reasons five and a half years ago. An old computer game client wanted me to familiarize myself with MMOs to work on his high-profile property being developed. Nothing came of that in the end, but I enjoyed WoW enough to keep playing.

Many of my real-life friends play with me now and because of that, I don’t foresee abandoning WoW any time soon. But I have a confession: lately I’ve been dallying with other games. Other bloggers have occasionally expressed similar pink-faced confessions — it does feel a bit like I’m cheating on my lover.

PLAYING WRATH
It began by flirting with a beta. My first beta was Wrath of the Lich King, the third expansion to WoW. All those who attended Blizzcon 2007 were given beta keys, and I leaped into Northrend as soon as I could.

It was… interesting. I wasn’t prepared for things to be so buggy, for server crashes to be so frequent. I loved exploring things early, though, getting the first-glance jitters out of the way before my real characters faced the challenges there.

Playing in the Wrath beta didn’t feel like cheating on my boyfriend, because it was my boyfriend — just one who’d come from the future through the Lich King’s terrible magics. I was down with that. But it gave me a taste for such things.

FUSION FALL
I think my next beta was Fusion Fall. Getting into it had overtones of a professional obligation, which kinda made it okay, like helping to host the company Christmas party with your boss. You’re not dating your boss, you’re just standing beside him greeting the guests coming in the door.

Fusion Fall looked like it might be particularly library-friendly, and it was my library + gaming specialty that took me there. I actually was in pre-beta, the Friends & Family, because I’d worked with one of the designers in years gone by. Athough I’d played a bit of some comparable games — Runescape and MapleStory and Puzzle Pirates — it didn’t excite me. As Christmas parties go, I was glad to wave goodnight to everyone and go home to WoW.

Still, I am pleased by the number of kids I see playing it on the public computers in the library. When my library system started looking into piloting an MMO club, Fusion Fall was one of several games I suggested we consider using. (We went with Dungeons & Dragons Online instead.) It’s a good game, just not my game.

I got into the Starcraft beta. By now I was cheating on my boyfriend with my boyfriend’s half-brother, but at least I was keeping it in the family. (For those of you who don’t know, it’s another game from Blizzard, the people who make WoW.) I suck at real-time strategy, however, and that dalliance was brief and completely unsatisfactory.

I have to jump in here and add that, if the rumored Titan game really is a Starcraft MMO, I’ll be all over it like ugly on a hound dog.

Spore was a game that intrigued me when it was announced in 2008, and I’d downloaded the creature creator to flirt with. I didn’t get the game because once it was released, I heard little good about it. Besides, I was already playing slap and tickle with the Wrath beta. However, Darkspore is in beta right now, an action-RPG spinoff, and I’m playing a bit of that. I can’t quite decide whether I actually like it or not.

BREAKING THROUGH
My licentious ways have started to get more serious, now. Recently I played in the final Rift beta before launch. I never got to spend much time playing, so I didn’t get a good feel for the game, I think. By all accounts, it really begins to move after leaving the newbie areas, something I didn’t manage to do.

I wanted to try it for many reasons. I thought the advertising campaign trumpeting that Telara wasn’t Azeroth was pretty lame, but the bloggers who said “um, sorry to disagree but yes it is” also said “…and it is just different enough to feel like my first exploration of Azeroth all over again.” What a seductive possibility, mmmm!

I didn’t experience that feeling of “everything old is new again” in the beta, but I’ll be waiting for friends to tell me more. The idea of invading rifts creating spontaneous raid-quality groupings has an enormous appeal over the wet-cat-herding, competing-for-a-slot-on-the-A-team frustration/elation of raiding progression in WoW. However, the Rift justification for how your character comes to be one of the Chosen Heroes of the World left me gagging a bit. I might find that background story too annoying in the long run. If Rift eventually offers a 10-day free trial, I’d be a prime candidate to give it another chance.

A RISE OF DRAGONS
Even as the dragon Deathwing shattered my old Azeroth, I became seduced by the dragons in Ferelden, beginning the pretty serious affair I’m having with Dragon Age right now. Yes, I came to the game late — it was first released in 2009. So many of my friends talked excitedly about it, I became interested. After watching the trailers for the upcoming DA2, I was hooked.

Ferelden is a darker, bloodier world than WoW — it carries an M-mature (over 17) rating vs. WoW’s T-for-teen (13 and up) rating. It’s like dating Harry Callahan (“Dirty Harry”) instead of Blondie (“The Good, the Bad and the Ugly”). Both kick some serious ass but there’s a definite difference in overall maturity of content.

WHO IS WITH ME?
For me, the biggest drawback to Dragon Age is that it is a solitaire game. In DA, you run all the other characters on the screen. Bioware does an excellent job of making the characters feel different, seem like people you can relate to (love or hate), and it does not feel as isolated as a first-person-shooter game like Doom that I played solo a kajillion years ago. But the only way to share the experience is outside the game, talking with or emailing like-minded friends, reading forums, and so on.

I enjoy the socializing in WoW as an important part of the game. The nightly companionship of friends feels comparable to heading down to the local pub for a pint after dinner. Maybe you get up from the table to throw a few darts at the board , but the important part is that you have your friends around you. Whether it’s a guild member’s greeting of “How was your day?” or the little gnome mage and the owlbear moonkin on the screen killing the boss my bear is tanking, the social presence in a virtual world is very real.

I miss that, but not enough to keep me away from Ferelden completely. I like the feel of the story too much. I played a round of the DA2 demo yesterday and plan to give it a few more runs. I’m definitely getting the game because a couple of friends — people I met in WoW, in fact — have decided that I need it, even though I haven’t finished the original DA game yet. (Thank you again, E and M!)

THE BENEFITS OF FRIENDS
Do I think Dragon Age is my homebreaker, the game that will cause a divorce from WoW? No. As I said, WoW has the lively presence of friends, both people I know in real life and others met within the game.

Moreover, DA has a beginning and a definable end: at some point, I will have done everything that the game has to offer. There is a lot of potential replay value but, as Yahtzee Croshaw says in his review in Zero Punctuation (very NSFW!!!), I’m probably not going to play more than one possible character from beginning to end, although I’ve done the opening sequence for four of the possibilities over the course of my (at the moment) 40 hours of play.

I hear that those familiar with Bioware’s other games find DA no different, arguably no better. Despite calling myself a gamer, despite the many game titles I mention above and others I’ve played as well, I’m not familiar with many titles you’d expect a gamer to know. Let’s face it: I’m female and I’m older than the average gamer-age of 35, and neither of those put me in the most-likely-to-be-a-video-game-player category. Many people my age come into the library saying “I’m computer illiterate” like it was a badge of honor. But if Croshaw is right about there being nine novels worth of fiction in Dragon Age: Origins alone, then that’s a lot of interactive story to experience and explore, and it’s a story I’m enjoying enormously.

So I’m looking forward to playing Hawke in DA2. WoW isn’t a jealous lover, and he knows I’ll be back. 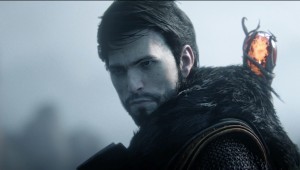 One Reply to “Betas, Demos, & Cheating on Your B/F”