Earlier this week I hit “Reboot” on this blog. A computer analogy for the modern age? Indeed, but now I’m going to indulge an analogy from the kind of electronic gaming I play most.

“I just got my paws on the latest expansion to My Life and now it’s time to start leveling up again.”

New quests, new gear to work for, new bosses to bring down, a chance to meet new battlefield companions in a vast world that is both familiar and new all at once. Last week’s release of the Cataclysm expansion of World of Warcraft is a fitting paradigm, even if all my readers here don’t play or don’t care. It works for me and I trust my imagery will explain where I’m coming from.

Sure, I could just say I’m setting out to reinvent myself (again). Isn’t that term what Hollywood wonks and political spinmeisters use to applaud their clients stepping back into the fray after some time out of the limelight?

I prefer more heroic imagery. If my freelancing life is my realm, it has been taken over while my attention was elsewhere. Time to retake my kingdom.

JUST TO BE CLEAR
I’m not giving up on libraries or librarianship. As I said last Saturday, I care deeply and believe fiercely in the value of libraries. Still, I’m employed half time, and I expect to continue so. That arrangement worked for me in 1985 when I took my first position in the Phoenix library system. That arrangement saw me through the height of my gaming career in the 1990s. I know it’s feasible and practical.

Half-time is not half-hearted, and libraries are just one feature of my life. This Oakheart site is mainly for the oddball eclectic and the freelancer, the artist and the illustrator and the writer and the Maker. I certainly expect to talk about all kinds of topics but for this website, expect me to wear my freelancer’s hat most of the time.

QUEST GIVERS
When you log into a new game, someone on the screen is going to pose a challenge for you to solve. Yes, some games leave you wondering where to start and that’s the point [*cough*Portal*cough*], but stick with me for now and don’t quibble. For this post, I want to acknowledge and coincidentally recommend one of my first quest givers.

MONICA VALENTINELLI
Monica Valentinelli hit my radar before I even knew I was getting set to play a new expansion. Facebook has its detractors, but I am very glad to have met her there about a year ago. We were commenting on someone else’s post and ended up friending each other, then corresponding.

As we talked, Monica’s superpower manifested: she makes insightful connections and analysis from seemingly-insufficient data. A creative professional herself, she recognized the nature of my struggles even before I did. We talked about my work and things I was dissatisfied with, and she asked questions I needed to think about.

MONICA IN PERSON
I finally met Monica face to face while attending NeonCon in Las Vegas a few months ago. She gave a talk about “Marketing for Creatives” and I was curious about “Writing for the Web.” The former helped bring me up to date about some current practices, and the latter wasn’t what I was expecting at all. Still, I came away understanding a little more about SEO (search engine optimization) and web analytics that will certainly help me in several aspects of my work. 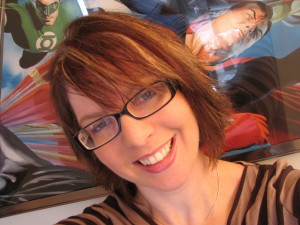 She then spent the better part of another hour with me. I listened with considerable respect to a woman with a sharp mind talking and thinking tactically, giving evidence of hard-won experience and expertise she willingly shared, one professional to another. I took a lot of notes.

It may take some time for me to put her advice into practice, but I’ve taken some of the “quests” she proposed and have already been rewarded with new arms and armor, new tools to tackle tomorrow’s challenges.

I’ve met plenty of razor-sharp women and men over the years, many of them willing to share their knowledge. Monica is particularly good at what she does, in my opinion, pragmatic without being dogmatic. If you ever get a chance to hear her speak at a convention, or have the opportunity to work with her, I believe you will find her professional advice and insight valuable.

WHAT AM I?
I say “some quests” but not all, because I am willfully ignoring some, too. Some things I ignore may eventually bite me in the butt. I’ve been told by other creatives and even my own father that trying to be jack of all trades will leave me master of none. Monica didn’t put it that way, but certainly made it clear that I was making life more difficult for myself. Trying to be an artist and an illustrator and a writer and a graphic novelist and a library person and… and… AND…

No, at some level I suspect that might not end well, really. But I have forged through “difficult” before, and came out the better for it: reforged, if you will. I know my strengths and weaknesses alike. I can deal with “difficult.”

JACK OF ALL TRADES

One particular strength I bring to librarianship is being conversant with, interested in, a wide variety of subjects. A gluttonous curiosity about all things past, present, and future informs my art, my game design, and my writing as well. My father was wrong: being jack of all trades gives me a grasp of them all, and that endless well of information serves me very well indeed.

And I’m stubborn. I am not content to be just one thing. I have already cut away many non-viable aspects of myself. I have always had many interests but when I pursued some more deeply, they took me to a dead end. Yet they always left me with something valuable, too.

I’m not a primate researcher, although my advisor at the university was a student of Jane Goodall’s. Her passion for the work was infectious. From that experience, I took away a nuanced understanding of behavior, anatomy, pathology, and psychology of people and animals.

I’m not a polyglot linguist, although I was determined to be a translator for the United Nations back in the day. I took away passing familiarity with Spanish, French, German, and Russian, with minor detours into Japanese, Chinese, Sanskrit, and such oddities as Esperanto. I acquired knowledge about English and wordcraft I could have only learned by looking at my native tongue from the outside.

I’m not Indiana Jones, the adventurous archaelogist roving from the Arctic to Iran to mythic Camlan to Chaco Canyon, though that kind of work enticed me into making Anthropology (Archaeology, really) my first choice for a career, lo these many decades ago. My world-building skills (whether for game design or fiction) grow from knowing what I do about the ways human society organizes itself. Real world cultures, literate and pre-literate, inform my respect (or lack thereof) for others creating fantastical cultures and mythologies and how a mere protagonist becomes a hero.

I am not giving up more than I must. The versions of Me who would have been these individuals? I hope they still exist in some alternative universes. I couldn’t be them all, but I certainly did learn from them before they left this timeline.

WHAT I AM
So while I may not be a master of many things, I am nevertheless pretty damn good at a lot of them. My past history speaks for itself: freelance artist, illustrator, writer and editor. I am not resting on my laurels; there are too many new and engaging things I haven’t yet done, quests still to be undertaken, and the heads of fell monsters will hang on my trophy wall.

What I am is making a new tomorrow. Come with me.

8 Replies to “Gearing up in the Next Expansion”