ONCE UPON A TIME, O Dearly Beloved, I made a little drawing. While making art for the new French edition of Tunnels & Trolls, I was just thinking in terms of something easy to fit into a blank spot. 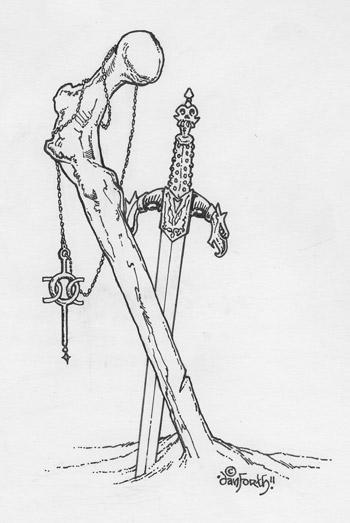 Back in the pre-Internet days of mailed APAs and fanzines, we used to call them “fillos” … filler art. Rarely special in any way.

I did a piece I wound up calling “Aftermath.” It suggests a story without actually telling one, leaving plenty of room for the viewer’s imagination. A bone shows evidence of a cut that must have been powerful enough to slice through the flesh that once covered it, a sword abandoned, and someone left a chain bearing what appears to be a religious or otherwise meaningful icon, perhaps as a memorial to the event that transpired.

But that wasn’t the end of it.

Some weeks ago, I got email from the fellow who bought that little fillo “Aftermath.” Unassumingly, he said “I hope you enjoy my fanart. 😉 Near the end of this project I may have strayed over the line into obsession.”

This is what he sent me (used here with his permission). 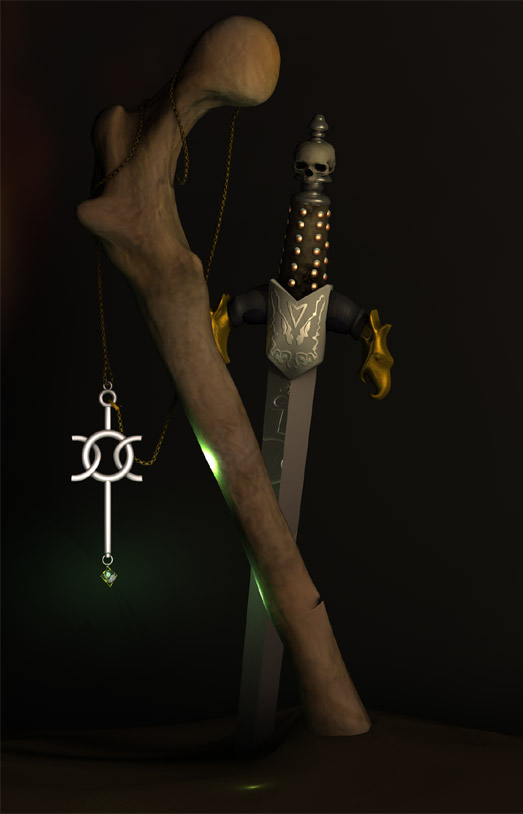 It isn’t often that I am speechless. Seeing this piece of art the first time left me breathless, speechless, and awed. That feeling returns every time I clap eyes on it.

Quoghmyre, as he is known and who calls himself “the Southern Most Troll” hailing from New Zealand, took a little bit of visual fluff and made it reality. The shadow of the chain on the bone; the gleaming green light and its many reflections, the old dark bloodstains on the leather, the tiny skull on the hilt contrasting to the enormity of the thighbone…

Quoghmyre’s email said “I’m sure you can see lots of places where my guess at your intent went astray, please forgive.” No, Quog, what I see is your imagination rising higher than mine! To me, the skull on the sword was merely a sculpted bit of business put there by the blacksmith. You saw the potential story captured by using a leprechaun’s skull to contrast with an ogre’s thigh! (Those are his words about the piece, not mine.)

I AM SO FORTUNATE
Over the years, I have been incredibly lucky to receive gifts like this, some real and some virtual, and some have been words that moved me to tears. Such things always surprise me. Fan art? From my work? I cannot look long at the “But why? Why me?” question; I just can’t. That way lies rump of skunk and madness.

Fan art, like fan fiction, has its own issues. I am one who believes in the value of today’s participatory culture; that ethical experimentation with media literacy and artistic expression is a positive thing and are absolutely necessary skills in the 21st Century. No, I don’t want people taking my creative efforts wholesale, and making bank for themselves without so much as a by-your-leave because I live by my wits and what people can pay me for what I do.

But Quog’s work is magnificently transcendant of that, and everything he has done has been done with the utmost respect, personally and professionally. In turn, let me point you to his T&T fansite (newly revised, I hear) at Southern Realms. It seems, literally, the least I can offer in return. 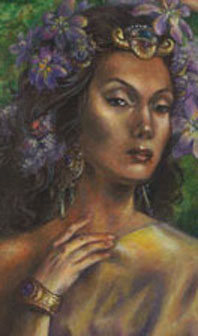 GRATITUDE
Most of all, I have to say “Thank you” to all those who have shared their gifts and their stories. Thank you to Quoghmyre, who spent a great many of his life’s hours working his way through the pinhole I peeped through, and took an exquisite photo of the reality I barely glimpsed in that otherwhere. Thank you to the people who gave me raw turquoise and topaz because my drawn costumes inspired them in their jewelry-making — and to the woman who asked about the back of an outfit seen only from the front in an illustration, as she asked permission to make the dress for cosplay. To the composer who asked permission to use my art as backdrops in the Tolkien-based symphony performance he’d written for his master’s degree in music.

Thank you to Sasha, who opened his mind to words and writing and literature because he wanted to know what my pictures were about in those game books at the store. Thank you to artists whose talent and ability far surpasses mine, for telling me I inspired them at some point in their lives, and to younger ones saying they hope to put their skillset to work as I have.

And many others. Thank you all. You’re all crazy as bats, but in an awesome, amazing way.

In turn, I am inspired to do my best with every piece I turn out. I can never know what image I make will inspire someone else to create something, learn something, change something. Anything that inspires creativity in others, that increases beauty in the world at large is …

Damn. The whole thing is leaving me speechless again.

Inspiration. The very word’s etymology is about breath, spirit, breathing. And being touched by something divine. You all inspire me, and you humble me. Thank you.

7 Replies to “Humbled by Beauty”