WEEKS GO BY and I never get past “I should write about this [event, thought, picture] on the blog.” Maybe I’ll do a catchup post another time, but today I had a real life adventure because of the work I do. And it’s nothing they ever warn you about when you decide to become a freelancing creative, whether a writer or artist.

I occasionally work with reference photos. I mentioned something about that in my last post, about the card alteration I painted. And when I’m working on something where I can use local color and real locations, it only makes sense to go have a look-see and maybe snap a few photos.

I did this a week or two ago, getting some photos for local color. (And yes, Tucson is serious about “color” in the local color!) 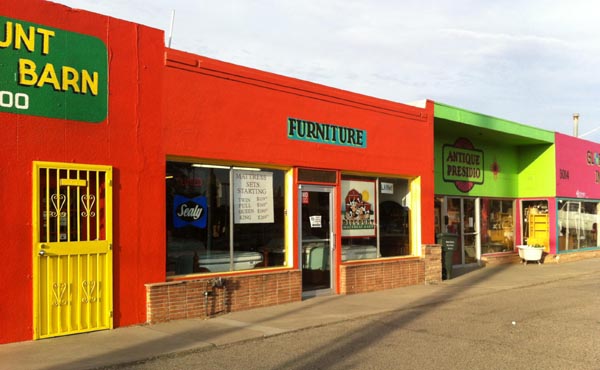 So today I was off picking up a package from the far end of town and realized I wasn’t too far from a location featured in the zone I’m presently writing content for, for the Wasteland 2 computer game. I spotted some “location shots” that applied to something I knew might be relevant for someone else’s section also.

So I pulled over to the side of the road and started taking shots with my phone. I drove a ways closer to an interesting spot, with some really interesting visuals, and stopped the car again. I took some more shots and a short video.

TAP TAP TAP
Then someone tapped on my car window.

“Why are you taking pictures here?” growled the big man in the security uniform.

“I’m working on a video game and some of it takes place around here, 100 years in the future. I wanted to send the producers some reference pictures of what it looks like at the moment.”

“You can’t take pictures here. After 9/11, it’s not allowed. The FBI wouldn’t like it. You’ll have to delete the photos.”

“Your name? And what is this for specifically?”

“Liz Danforth. The game is Wasteland 2. We did the original game back in 1988; this is the sequel we’re working on. You can look me up on the web and verify all this.”

AFTERMATH
Okay, so the conversation wasn’t precisely like that, but that’s the gist of it.

I have many thoughts concerning how the whole thing was handled, but I’m going to keep them to myself. You can correctly assume they swing wildly between laughing my ass off and shrieking in horror. Regardless, I now wonder if I’m on someone’s watchlist, and what kind of welcome I’ll get trying to board a plane in the future.

It might have made a better story if I’d been arrested, I suppose, or mistreated in some other fashion. I wasn’t; it was perfectly civil although seriously surreal. I wasn’t even taking pictures of a locale that I *knew* would get me a hairy eyeball further down the road. (I simply made written notes for myself after driving by.)

NEVER STOP WORKING
Years ago, my ex and I went overseas for the first time. When asked what he did for a living, he said “Writer.” Without looking up, the customs official said “Business or pleasure?”

Being well-informed of the consequences of saying “Business,” he answered “Pleasure.”

The customs official looked up from under the brim of his cap, completely seriously, and said “Writers are never not working.”

And it’s true. I’m presently wearing my writer’s hat, pulled down low over my artist’s eye. Everywhere I go, every person I talk to or overhear, every sign on the street, every strain of music — it all goes into the stewpot of my brain for potentially being altered, remixed, and developed into something I can use.

I have a t-shirt that reads “Careful, or you’ll end up in my novel.” I expect there might be a perfectly civil but fairly scary security official somewhere in the zone I’m writing right now. (Given what I’m doing, there may be more than one. Or two. Or ten. Maybe even an entire Cohort.)

But this sure isn’t the kind of thing they mention when you when you sign up to be a working artist or writer.

Tell me about such experiences you might’ve had in the comments. It would really be nice to know I’m not the only one who ever had things like this happen.

ETA: I didn’t make this clear upon writing it, because I didn’t want to deliver anything that might qualify as a spoiler. I’ll just say that it was, in fact, a federal facility (not that I realized it) and there are restrictions on photographing them. The guy was doing what he was supposed to.

24 Replies to “The Hazards of Reference Photos”