I’ve been pretty out of it since coming back from GenCon. I talked a bit about GenCon in my Library Journal games blog, but with extra attention paid to librarian and educator considerations. Here I can relax a bit to talk among friends instead of professional colleages.

I did have a fine time, getting to meet new folks like I.K. and D.G. and Loki and Phil and Sean Reynolds. Sean even put up a picture of me (ugh!) and a few words on Paizo’s blog. I did have to tell him that the Grimtooth art was S.S. Crompton’s — I created the original character but Steve has been the one illustrating him ever after.

I got to catch up with quite a few friends I haven’t seen in many years, pros in the industry like Steve Jackson and Lisa Stevens and Pete Fenlon and Steve Kenson, and old acquaintances like Jason and his fabulous wife who joined me for breakfast one morning.

It was a pleasure to visit with Nicole Lindroos at Green Ronin, and I look forward to getting my hands on the Dragon Age rpg books. I wish I had had time to play a demo game.

And it had been a very long time since I’d had a chance to sit down and just enjoy the company of people I used to see almost every day: Steve Crompton, Rick Loomis, and Ken St Andre.

I doubtless forgot to mention someone by name who will now think less of me, although I hope you’ll forgive a foggy and overstimulated brainpan. The con was wonderful but exhausting and frankly overwhelming. I didn’t realize I was going to need to get into training to survive a GenCon — next year, I’ll be better prepared.

ON ROUND SHAPES
Meanwhile, the pictures others took of me (here in the Massively article too) have led me to redouble my determination to get into better shape. Make that “better condition.” Round may be a shape, but not one I’m comfortable with. It is nevertheless the inevitable result of jacking into the computer 24/7, which is pretty much my life if I’m not at the art table or library.

A couple of decades ago, I flirted with can’t-quite-call-it-anorexia to be “normal looking” and I kept the weight off for seven years (far beyond the usual results of “yo-yo dieting”). But after all, running three miles a day every day + 1000 calories works great. (Do the math. That’s a net caloric intake of about 100 calories a day.)

It also had unhealthy consequences. I’m not going back there, thanks. But better food choices, mild exercise that doesn’t mess with my knee (which still needs surgery) — that I can and will do. Am doing. Have actually been doing since the end of April, to good effect at a reasonable pace. So it’s all good.

Maybe I wouldn’t link the pictures but I’ve learned that people like to have a face to go with a name. Those pictures are out there, so I can’t hide from them and don’t really need to. I don’t hate the person in the mirror or the numbers on the scales — I hate the possibility of not drawing all the art I want to, not writing all the stories I want to, not getting to attend and enjoy a lot more GenCons for years to come. GenCon wore me out more than I would ever have expected, so I obviously need to do something about it.

IN OTHER NEWS
I have a few old Iron Crown books for sale (for the Middle Earth Role Playing game, and long out of print), all of which have a good bit of my artwork in them. Sale ends on Aug 22nd.

Keep an eye on the eBay seller “oakheartaz” — that’s me. I plan on putting up quite a bit more over the next several weeks — out of print games like those above (and many other systems), and some original artwork. More about that in the next post.

Meanwhile, I’ll leave you with this image, which some of you might recognize from the inside back cover of the Fifth Edition of T&T. Feel free to theorize why I end the post with this picture, when I’m talking about selling some of my original art. 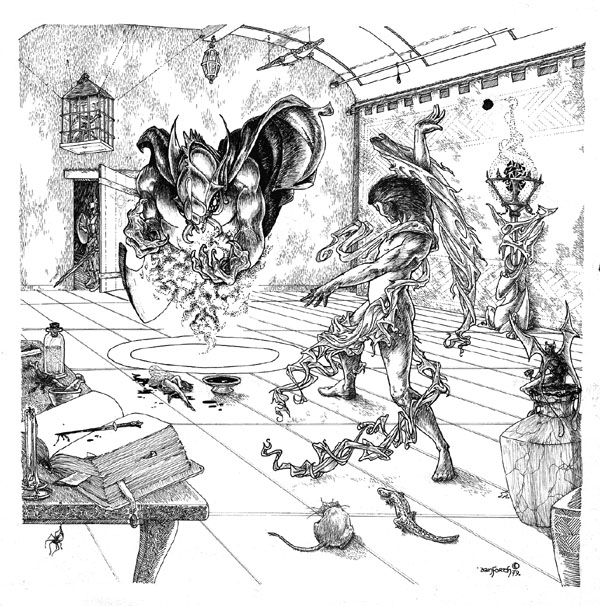 This entry was posted on Saturday, August 20th, 2011 at 7:18 pm and is filed under Art, Conventions, Freelancing, Gaming. You can follow any responses to this entry through the RSS 2.0 feed. Both comments and pings are currently closed.

5 Responses to A Brief Look Back at GenCon 2011