When Lisa Poisso’s first email showed up in my inbox last week, you could have knocked me over with a feather. WoW Insider? Interview me? Really??

That reaction was immediately followed by “Hell yes! I’d be thrilled to be interviewed for 15 Minutes of Fame!”

PLAYING WoW
Well, kind of. I am in an odd place with World of Warcraft right now. I still love the game but, after playing six years pretty steadily, I have been playing less lately. My first question to Lisa was, “You sure you want me to? I haven’t been completely happy with the game for some time now.”

Her response was that a lot of other players could relate to my misgivings, and to the fact that I was still playing because I didn’t completely want to not-play. That, and she wanted to look at the ways WoW has touched my life.

It certainly has done that.

HI THERE
It continues to do so, not least of which because the article is bringing a lot of new people here to my blog. That’s why I chose to title this post as I did.Â  😉

I’m glad you stopped by. Have a look around, put your feet up, and can I get you a mug of your favorite beverage? Artwork samples this way, bibliography that way, previous posts down the hall and to the right. Don’t mind the construction tape.

I won’t steal Lisa’s thunder. If you came to this post from somewhere besides that article, read her post on WoW Insider and check out Part Two which is scheduled to go up next week. We’re having an interesting conversation, she and I.

THE INTERVIEW
In the course of the interview, I answered Lisa’s questions and brought up many things she didn’t even ask about. She asked for and got permission to make it a two-parter — and, at that, said she has at least four times as much information as can be used already. (And I still have more questions to answer for her! No, I don’t write short. She’s an amazing editor, stitching together the pieces into a seamless whole as she is.) 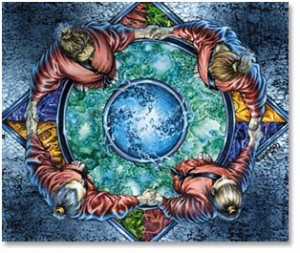 I had already planned to talk about WoW, among many other things, for the Speak Out with Your Geek Out event running next week. My conversations with Lisa for WoW Insider are prompting me to noodle through a few ideas I wouldn’t have originally thought of. It’s an interesting ride. I’ve been interviewed before, on a number of occasions. I was the featured artist in issue 6 of The Duelist, for example, and James Maliszewski also needed a two-parter to interview me for Grognardia a couple of years ago.

But for some reason, the idea of a post in WoW Insider made me unaccountably nervous and excited at once. WoW really has been a huge part of my life for some time, and yet Lisa was equally interested in all the related parts of the gamer me. (I did tell her that, if she was going to mention a particular Magic: the Gathering card by name, that Hymn to Tourach was the one more people would know me for!)

So whether this is your first trip to Oakheart, this site of mine, or if you’re a regular here, I hope you’ll come back over the next week. I have some surprises in store, and more to say.

Then again, I always have more to say. Just ask Lisa.

5 Replies to “Hi there, stranger”