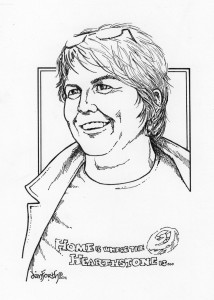 YOU WILL FIND a few new pieces in the “Newer Artwork” page of this site. One is that mug you see off to the right here. I had occasion to do a self-portrait for my upcoming print column from Library Journal. (I have written about games, gamers and gaming since March 2009.) It seemed a fitting occasion, as you’ll see if you catch it when it comes out. (I’ll link it here when it hits the net, which should be next week.)

A wonderful fellow librarian, whom you can follow on Twitter as @Miriella, snapped a photo of me the last day of the TechSource Symposium a couple years ago. She liked my t-shirt, being also a fellow WoW-geek. The shirt is something I often wear on any long return flight because… well, I really wish it was that easy to get home!

Miriella’s pic was a good one but the Library Journal art director thought this would be a good opportunity to have something that wasn’t a photo. And while I’m not too terribly vain (I don’t think), it gave me a nice opportunity to improve on a few lines, shall we say.

I also want to go back to that hairstyle. It looks better than I remember.

NAMASTE SKETCHES
The second pic is a montage of a few of the sketches I’ve done for Namaste’s Storybricks. I’ve been hitting all over the map, ulta-realistic to ultra-quick-sketchy. Matt is the fellow who is tasked to eventually make real people, visual assets, of the people I’ve been knocking out. He has been trying to get me to loosen up, to create silhouettes identifiable at a glance, and it’s very different from what I have done in the past. Fun, but very different. We’ve gone back and forth, and (in theory) when some basic forms begin to strike his fancy, we’ll work on developing them into something more. 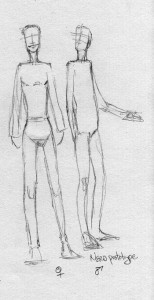 I got a kick out of doing the lanky guy in the upper left of the Newer Artworks page. I was out in the woods with my sketchbook and saw the most curious-looking maple tree just throwing on its crimson headdress for autumn. I decided to see if I could make a character out of that tree — this guy is the result.

I also was amused to think “if I were going to draw a stereotypical nerd, what would be body type look like?” … male and female alike. That’s the two stick-limbed characters, here on the left.

This is just a fraction of the bodies I came up with. Most look like the super-quick ink sketches, exceedingly unfinished, exceedingly gestural. Not quite sure if this is going to get us anywhere, but Matt seems to think it might. It’s all new to me.

TRAVELLER ART
Final set of new pics on that page are a few of the graphics I did for Marc Miller and his Traveller update. There were a number of items, and an array of “manipulators” that various interstellar species might use as we use hands.

Arguably, the page has two “self-portraits” since that hand is, yes, mine. Easiest model for me to hire, cheap at twice the price, and one who never argues with me about posing.