With my first cup of coffee in hand this morning, I attempted to lay out a mindmap for what I still need to do this month. Nothing formal or extensive: just a visual touchstone for a visual person.

Then I realized the month I had in the middle of the picture was… March.

This spoke volumes about how “April, the cruelest month” has been for me…

NASTY BRUTISH AND SHORT
I started the month with the springtime cold that’s going around. Four days of fever, lying in bed trying desperately to be unconscious or at least to stop drowning in the effluent of my sinuses. Days afterward feeling like something the cat dragged in, like a dog’s dinner, like roadkill on the information highway.

Once back on my feet, I was actually looking forward to the 10 days I would spend dogsitting for an old friend, author Jennifer Roberson. When not writing awesome fantasy novels, she breeds equally awesome Cardigan Welsh Corgis. Two of my furkids came from her, in fact.

I’ve watched Jennifer’s animals before, years ago. Ten days, I thought, away from homelife bad habits! NoÂ  easy access to the Net and its endless distractions! I could write or edit offline on my laptop! I’d get sketching done! I’d be oh so productive!

Start with six dogs, not all of them able to run in the same physical area — after all, breeders need to leave some of their animals “intact” (as they say), which can cause conflicts at the best of times. Two of the bitches (who left with Jennifer to attend the Cardigan National Specialty) had recently come into season; more lingering air of conflict. And Jennifer had only moved to Tucson a month ago, so none of the dogs had really settled in.

I had my hands full. Consequently, I didn’t get a lot of my freelance work done.

NOT COMPLAINING
Jennifer has some really neat dogs who I enjoyed hanging out and playing with. The house she’s in is pretty nifty and located in my childhood neighborhood, so it feels very homey and familiar. Most of all, Jennifer has been a friend for around 27 years and I was more than happy to help her out.

However, it made me acutely aware that (a) my tightly-structured 168 Hours Program is extremely fragile; and (b) that I was going to have to hustle to get back on track.

That’s why I was doing the mindmap, after all — so I could see what was on my plate. It was just a little depressing to realize that my undercaffeinated brain was stuck back in the pre-sick, pre-dogsit days, as if it were the 20th of March instead of the 20th of April.

SOME THINGS DID GET ACCOMPLISHED
I did get a few things done while at Jennifer’s place. After some early efforts to work in the tune-out-the-world way I usually do, I realized I had to undertake only those things that could be done in little segments of time. I was always getting up to swap animals around, making sure everyone got house time, yard time, hall time, and stayed out of the cat food. (There was a cat in the mix too.)

I SIGNED CARDS
I had Magic cards people had sent for my autograph. I thought I was caught up at the beginning of the year, but found a pile of old requests I’d missed at the time. 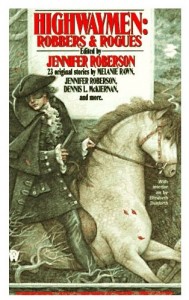 I AM NOT GOING TO SAY HOW OLD. Suffice to say I was horribly embarrassed to read the postmark on some of them. This is precisely why I tell people in my FAQ page that, if they send me cards to sign that (a) they absolutely must be patient because it could take many months (er, years?); and (b) they are welcome to nag me from time to time, and ask (politely, please) if I was going to get around to it any time soon.

I think I’m caught up now, though a few special packages have yet to be delivered into the hands of the post office.

I SIGNED BOOKS
There were some games, and a couple of books to be signed too. I was amused that one of them was Highwaymen: Robbers & Rogues which Jennifer had edited and for which I’d done a slew of illustrations, one for each story. I coyly thought to hold onto the book and get her to sign it when she returned (wouldn’t that be a cool surprise!) — only to find that the owner had already gotten her John Hancock and that of several other contributors.

I HAD MY SAY
I took an afternoon away from the dogs to participate in a live round table podcast. Brigwyn (Eddie Carrington) — a long-time podcaster and one-time WoW blogger — put out a call on Twitter, asking for those interested to come have a conversation about “Why We Play What We Play.” My last post about Dragon Age, WoW and Heroes seems to reflect an increasingly common unease, “a tremor in the Force” (to mix my genres, media, and metaphors) that has many WoW players asking “Are we having fun yet?” Brig and I had chatted via Twitter as far back as the Blizzcon when Cataclysm was announced, and he seemed glad to invite me to participate.

It might have been a WoW-vs-Rift knockdown, being on the Riftrider’s net and since Brig has himself been seduced by Trion Worlds Rift. But because it was a round table discussion with many voices, it grew beyond that. Others preferred Tolkien’s history brought to life in Lord of the Rings Online, some liked the traditional framework of Dungeons & Dragons Online. Some spoke of tabletop gaming fondly, and some of Magic: the Gathering. And there were still folks who continue to play WoW as their primary game-of-choice.

But we got off into some very interesting side tangents in the course of two hours. I need to re-listen to it myself, but we went into the very nature of game design and how to engage players, into academic research about games, and what makes any of these games worth our time. If you’re so inclined, you can listen to the edited version of the Riftriders podcast from here.

WRITING
To my surprise, the last two days of dogsitting gave me a chance to play with some of my fiction writing. I’ve been jonesing to do that for months but because my paying assignments are all on the art and editing side, or in the library world, I have put my efforts at writing fiction on the bottom of the priority list — below signing Magic cards, in fact. (And we know how well that goes!)

I prefer to have a chunk of time to write — quite the opposite of the short snippets of time I had with the dogs. However, years ago another author friend, Yvonne Navarro, gave me an odd little book of writing exercises called 3am Epiphany.

The nice thing about 3am Epiphany is that it gives you little challenges.Â  The exercises provided prompts for scraps of writing that fit the odd time constraints I was working under. I had the opportunity to sketch out ideas, explore personalities, to see how my brain constructed or deconstructed bits of the world in the standalone tale I’ve been wanting to tell for a long time. It wasn’t linear or cohesive but that was okay. It scratched the writing itch for a little bit.

I’m considering taking the Make a Pledge challenge I heard about today. I’m up to my eyeballs in projects, and behind on many of the infrastructure jobs that keep one’s life running smoothly. (Groceries? Dog food? Laundry? I put some laundry in the machine … recently. I think. Was that yesterday? It feels like yesterday.) I’m not sure where I’d find the hours to put into the pledge; even my gaming time has fallen ‘way off in the face of other demands on my time.

But we’ll see. Either I buy a lottery ticket, or I start writing at 3am whether I want to or not.Â  That itch to write doesn’t care about the hour.