I thought you’d appreciate a look at some of the work on my art table recently.

Lagniappe
Awhile ago, I spoke of the artwork I did for the French T&T, and mentioned doing a bit of lagniappe… that is, an extra little illustration to fill out the set. Ken St Andre, T&T’s game designer, had a yodelling yell of “RUN AWAAAAYYYY!!!!” when things looked like they were going pear-shaped for the adventurers, and that was the spark behind the illo.

I’m not sure why I decided (or even if it was I who came up with the idea) that it should be boars instead of more ordinary threats to life and limb. Dragons, orcs, zombies? What haven’t we seen lately, and what would threaten less puissant heroes? 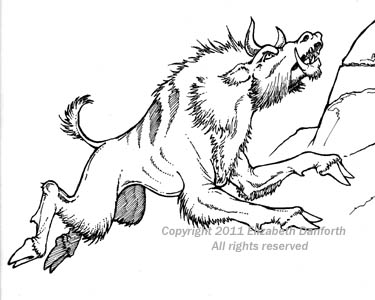 The original sketch had something between a bunch of javalina (the native desert species of pigs) and … I dunno… my vague memory of what a European boar looked like. As I said previously, the sketch lacked a little something, which is why it went unfinished originally.

When I sat down to finish it, I was still dissatisfied, so I redrew the critter. I called upon images of African warthogs and added horns, suggested the more vigorous body of a hyena crossbreed, and a bad attitude.

Heck, if I looked like that, I’d definitely have a bad attitude. The low level magician climbing up rocks to flee probably reinvented the Alley Ooops! (levitation) spell once this thing came charging after him.

Flying Buffalo is putting the book together this week for publication, so check in with them about when it will be available for purchase!

A Worried Queen, Waiting
More elegant than humorous, these linework illustrations (I’ve combined details of two) were ones I created for NamastÃ© Entertainment to illustrate some of their promotional material. You might remember it was NamastÃ© who prompted me to write about my thoughts on WoW, Dragon Age 2, and the nature of heroes back in April.

NamastÃ© is undertaking an interesting approach to how NPCs act and react. They asked me to evoke the scene in The Three Musketeers where the King demands the Queen wear the jewels he gave her … except her lover, the Count has them. I chose to imagine an otherworldly, exotic, and fantastical Queen as she waits, worried, for the adventurers to return in time… if they can. 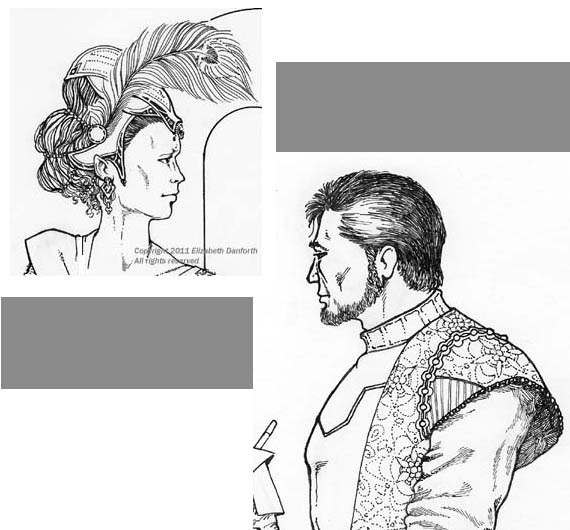 And of course, the Count had to seem elegant and attractive enough to lead her astray. Yup, he could talk me out of my jewels, aaannny time.

Back to the Future
I did a whole lot of art for GDW’s Traveller game and its several spinoffs, back in the day. So it was a pleasant surprise the day a note appeared in my inbox from Marc Miller, the game’s designer, asking if I was available to do some portraits in the old style I used for a lot of the game’s character portraits.

I was glad for the opportunity, and amused when Marc sent some photographs and a few old drawings to work from. One photo was of Marc himself. The others — were these his gaming buddies? I didn’t want to ask, but that is certainly what went through my imagination. 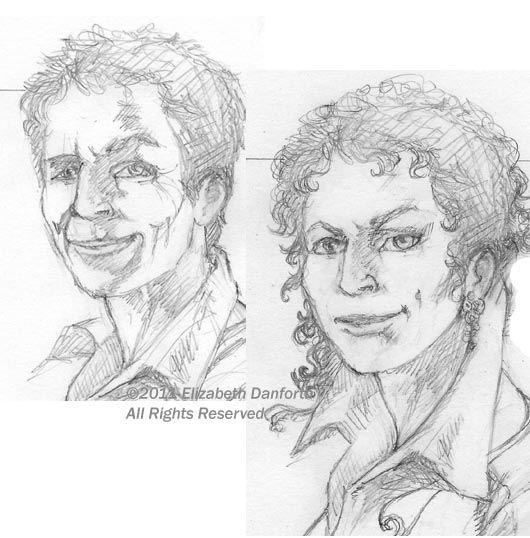 Art directors get to say Yea or Nay at the sketch stage, usually, and ask for revisions. Marc was pretty happy with them all… all except this one. “I had in mind more of a space princess.”

Mind you, the photograph of the woman — I don’t know her, although perhaps I should — struck me as someone with buckets of character, a wicked sense of humor, and a glint in her eye that said she would brook no monkeyshines unless she was the instigator.

However, space princess she became. I did my damnedest to keep that glint, the roguish gleam, and at least some of the character of her original. As I look at the sketch here, I see things I’ll need to tweak and fix when I ink the final work, but side by side this makes an interesting comparison to my mind.

Personally I like the older woman better. She looks much more interesting.

Marc didn’t tell me what the artwork was being done for, so I can’t link you to a forthcoming publication, nor any behind the scenes news.

I hope you found this visit to my art table entertaining, or at least amusing. I’ll have more for you sometime.

One Reply to “Works in Progress: the Weird and the Lovely”