At the beginning of last month, I put myself on the line, saying I had three things I wanted to “deliver” by the end of February. To remind you, they were:

I said I’d give myself an unbroken I-WIN button if I did all three.

This one I accomplished. It isn’t perfect and it isn’t what I originally set out to do, but eight new pieces of art have been delivered to Rick Loomis for inclusion in the French translation of Tunnels & Trolls he’s preparing. 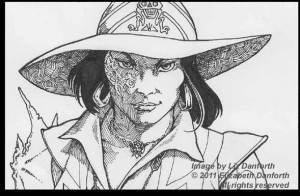 I’m pretty darn pleased with these. I was supposed to do a handful of small pictures, nothing too fancy but …I kinda… um, got carried away. I’ll probably talk more about these pieces another time, but this image is a detail from one of the larger ones, to whet your appetite.

Admittedly, I just unearthed a sketch that I did for this project awhile ago. I wasn’t going to include it but on reconsideration, I think I’m going to ink it up after all. It was based on something the translator specifically mentioned he’d be interested in seeing, so even though it’s not as vibrant an image as some of the others, I want to get it added to the mix. I’m not going to beat myself up for not doing it “on time” since Rick Loomis at Buffalo was satisfied with what I turned in. This is more of a lagniappe.

You have to go to the Flying Buffalo website to see how the book gets released. I understand there will be print copies, as well as PDFs. I’ll let you know more when I know more.

I call this one a draw, rather than a WIN or PHAIL because I do have a rough draft in hand. It needs more work before I can ship it off, though. SLJ did not give me any specific deadline — the end of February deadline was self-imposed — and I’ll have to get back to this soon because it’s not going to keep forever.

There are projects that I think of as “a steel-covered marshmallow.” It’s really really hard to penetrate, to grasp, to wrap one’s brain around and bring to its knees. Then suddenly something clicks and you’re through the steel carapace, asking yourself “Why did I think that was so damned difficult? It’s a piece of cake!” Crunchy on the outside, soft and chewy on the inside.

I strongly suspect this is one of those. The plan for my next attack on this trick will be to pick five things to put in the cart, close my eyes to some of the secondary questions and issues, and JUST DO IT. Bear with me a little longer, and I will.

WELL, I DO PLAY ALLIANCE
In World of Warcraft, it’s a running joke that the Alliance never wins in player-vs-player battlegrounds. A track record of one win, one draw, and one phail would be awesomely amazing with awesomesauce of sparkly unicorns and dancing rainbows. (No quibbling about “You can’t have a draw in a battleground.” I know that. You get my point!)

In real life, I can’t award myself the I WIN button with that track record for February. This is not to say I didn’t get any other work done, mind you. I had a surprise short-term project land in my lap and go straight back out. I got some of those “lesser” projects I mentioned taken care of. 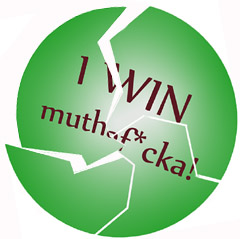 Then there was the assault I witnessed while eating lunch in the park with a friend. Believe me when I say that can severely mess with your ability to settle down and concentrate for a few days. (My friend called 911 and we yelled at the guy beating the crap out of the girl he yanked from their car, out on a back country desert road.)

One of my dogs became extremely ill, spent a few days in the vet-hospital, and required substantial amounts of at-home care once she came back to me. She’s doing well for now. I take her back to the vet for a last(?) followup tomorrow. And I was under the weather for most of a week, myself.

NO EXCUSES
Sh*t happens, as they say, and none of this excuses why I didn’t get done all I planned. I didn’t, and that’s that.

But I did the best I could. Some of what resulted was pretty damn impressive, and I’m proud of it. I didn’t win every match but I’m striving to win the next one. I have several clients asking for artwork, a pretty big editing project, a short story solicited, and with springtime arriving faster than a speeding locomotive, I have a winter-devastated yard to whip into shape in my spare time.

I’ll work on getting that unbroken I WIN button next time.

One Reply to “Facing the Music”