TWO DECADES AGO, I was attending GenCon, the big hobby-game convention around which the whole industry orbited. I had to miss this year’s convention, sadly, and I badly miss the inspiration of being around my fellow creatives. Moreover, the most amazing things can happen unexpectedly.

Two decades ago, amazing things were happening, and everything changed.

Yet I almost missed out.

JUST TALKING OVER A MEAL 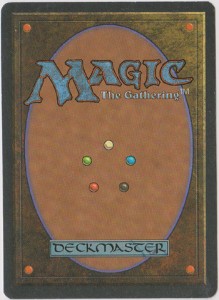 That year, I found myself sitting in a restaurant beside Lisa Stevens along with a gaggle of other industry people. Now the head of Paizo, Lisa had recently joined up with Wizards of the Coast. At the time, WotC was a new company that hadn’t done much yet.

As we were talking, Lisa exclaimed “Oh, Liz! I bet you’ll be interested in this.” And she pulled out a small playing card. The top half had a full color painting, and there was a bunch of text in the bottom half. It didn’t look that impressive and my publisher-brain was having apoplexy imagining the incredibly expensive costs to print such a card.

“We’re looking for more artists,” she said. “If you’re interested, you should talk to Jesper Myfors, our art director.”

The artist freelancer part of my brain promptly kicked my critical publisher-self into the next time zone, and I said “Yes, I’d love the chance to do more color work.”

Then we discussed prices and I was appalled. A painting for less than I was getting for inkwork? I couldn’t pay my bills with that — I damn near turned her down on the spot, but bit my tongue.

SAYING YES
Freelancers don’t say No readily, and only when they have to. (Consider that my advice-nugget, you who aspire to do such work!) I thought about it overnight. I talked to Jesper the next day. Then, I decided that any chance to be paid to paint was worth doing. I’d long since earned my stripes doing black-and-white inkwork, but I wanted more practice to tot up those 10,000 hours of mastery to be a good colorist.

I painted Rust and I painted Devouring Deep for my first assignments, published in June of 1994. Before all was done, I went on to create another 30 paintings for WotC and Magic. 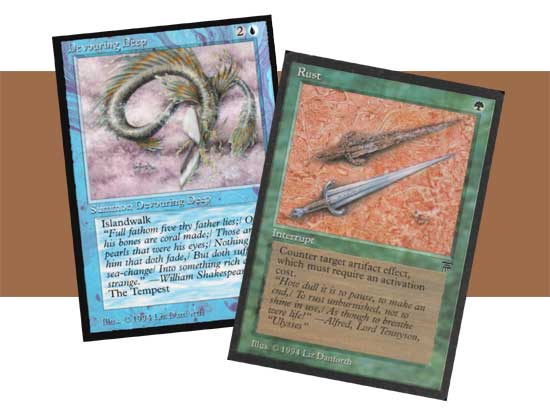 SELLING MY ORIGINALS
The Krab Jab Studio art show that I wrote about in my last post seems to have stirred up new interest in my artwork and I have gotten a number of inquiries. An industry insider says that the game is more popular than ever, and that also may be driving interest higher as the game approaches its 20th anniversary.

Over the years, I have sold many of the paintings. What’s more, I am absolutely certain I have a few others that I cannot recall selling but are not in my drawer of art. I assume they’re in storage somewhere… much as that makes me crazy.

In any case, this seems like an appropriate time to list the pieces I can actually lay hand to as I write. If you are interested, speak up; all are subject to prior sale. It saves me from cutting and pasting the same information into multiple emails!

MIND WARP
The original card art sold long ago. This “preliminary sketch”, however, is a relatively finished piece, in that I originally sent it in thinking they would use it as-is. The then-art director (I don’t recall if it was Jesper Myfors or Sandra Everingham) felt it was not polished enough and asked me to do it again as a full painting. This one is mixed media — pens, colored pencil, chalks — fixed down on a tan charcoal-paper background. 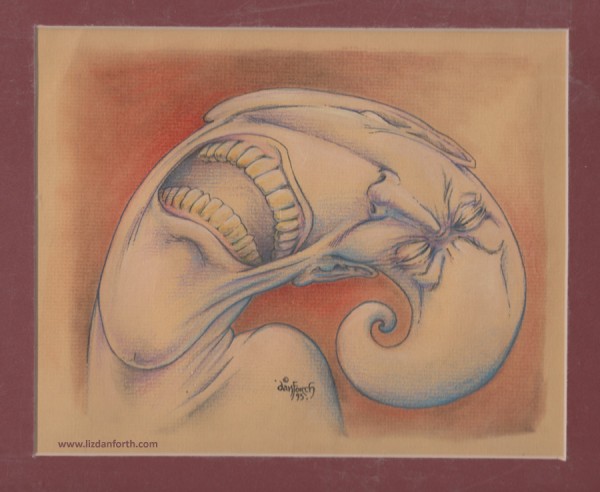 I enjoy playing around with different media occasionally, and Initiates of the Ebon Hand was done in a similar fashion. That was printed as submitted, and I made prints of it as well.

The prices for most of these originals range from about US$250-500. I’d go for $200 for the Mind Warp piece since it was never used, although it matches the painting that was used.

HYMN TO TOURACH and other outliers
I still have the original of Hymn. I happen to like it, and it is definitely the piece I am best known for. But because I like it, I am reluctant to sell it for a reasonable price(!). I have turned down $5000 for it. If you want it badly enough, you’ll have to make me a better offer. 🙂

If you have very quirky tastes, I have four pieces that were done for WotC and MtG, but were never used. Three are card art pieces. One was a huge painting intended to be a poster: the original is 35″x27″. All have their flaws but if you’re interested in seeing those, let me know in the comments below.

OTHER CARD ART ORIGINALS
I do not have a complete list of all my original card art at this time. Lame, yeah. I did many paintings for Iron Crown’s Middle Earth, for example, and I consider them some of my best work. I found it deeply inspiring to be able to work in an iconic world, able to say This is Legolas and Gimli in Théoden’s Golden Hall and not just a generic elf and dwarf holding bits of armor with the serial numbers filed off. 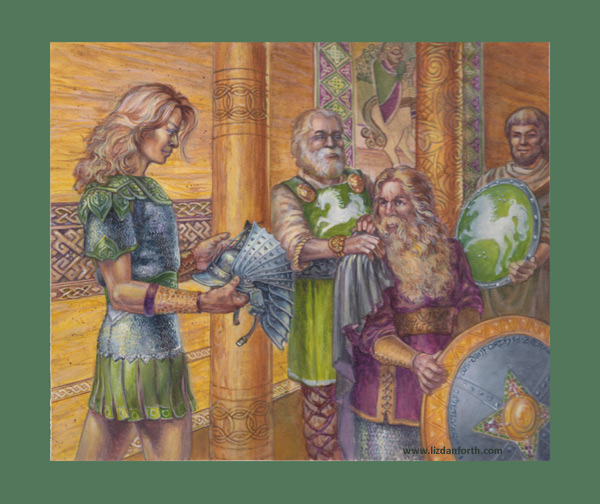 The faces don’t match the movies since they preceeded the films, but perhaps you’re okay with that. I know how eager I am to see The Hobbit in December, regardless.

I did lots of other card art — some for well-known series like Legend of the Five Rings — and for other games as well — FASA’s Battletech ccg, Precedence’s Wheel of Time, Deadlands, 7th Sea, and even Decipher’s Wars for which (as I understand it) none of the artists were ever paid although the decks were printed and released. I have originals for all these, and will be happy to discuss prices.

You can find a complete list of my card art right here. One of these days — when I’m not hip deep in a half dozen projects — I will endeavor to link pictures of each of these cards with their titles. For now, all can be easily found elsewhere on the net.

WHY I AM NOT DOING THAT IMMEDIATELY
Writing on Wasteland 2 is keeping me insanely busy. I’m having a ball and my coordinator on the project had some very complimentary things to say about what I submitted most recently. But it’s ‘way more time-consuming than I ever planned, because I keep coming up with deep twisty events and situations for the players to unravel when the time comes. Every project I ever did for Brian Fargo, I was admonished to rachet things down to KISS principles, but it didn’t stick in my head then and doesn’t now.

On top of that, I am stealing pre-dawn hours to work on edits of an illustrated themed anthology of my short fiction. Marc Miller of Traveller reknown has asked me to do more artwork, and the exquisite French edition of T&T has spurred interest in making a new Deluxe T&T edition in English. I have little time to give any of that but… I guess I’ll sleep when I’m dead.

NEW MAGIC-RELATED WORK
But what’s probably of more interest to you — you who have gotten to the bottom of this post as I talk about Magic? The earliest artists involved in the game (including me) are in development of a fine art book looking back at our early work for Magic and what we are doing now. I don’t want to say too much yet, as details continue to develop. But more than four dozen of us are committed to this project, and you should see an appeal for funding go up on Kickstarter in about three months. You can expect new art, old art, and our individual perspectives on what the last two decades have wrought.

At GenCon two decades ago, Lisa Stevens handed me a card I “might” be interested in, and I was. Fortunately, I didn’t miss out.