A WEEK AGO, I was at Illuxcon IX in Reading, PA. This week, I am back home in Tucson but my mind, my heart, and whatever passes for my artistic soul lingers behind. No other event is quite like this one; at least, not in my experience. This post will be more than a “con report” (or at least, that is my intent) but let’s see what I can cover.

OMG THE ART
Two thousand works of art of “imaginative realism” by some of the most revered, respected, laureled, and accomplished names in the business. Donato Giancola. Michael Whelan. Greg Hildebrandt. Don Maitz. Stephanie Law. Tom Kidd. Patrick Jones. Winona Nelson. Some are names you don’t know. Other names you should know, or learn, like Matthew Stewart and Annie Stegg and Chris Seaman. [Not all artists maintain personal websites, to explain some lack of links.]

There were sculptors too, like Thomas Kuebler who created one of the show’s iconic images (“Medusa”) which I found unsettling every time I entered the Goggleworks building. Or Kristine and Colin Pool, whose “Hot Diggety Dog,” always tastefully photographed in publicity shots, is wonderfully well-executed and quite NSFW.

Folk I knew from my early gaming days had art on display, showing robust skill and vision that you might have underestimated 20 or 30 years ago. Or not — they were remarkable and recognized even then. Jeff Easley was there, and Rob Alexander and April Lee and Mark Poole and Tom Baxa and Jeff Menges.

The galleries overflowed with works of excruciating photorealism, graphical designy works, and gestural surrealism approaching non-figurative abstraction. Some works seethed with violence, some were gentle as gossamer, and there was everything between. Dave Seeley, an exceptional artist in his own right, shared 197 photographs of the three floors of the show. Click over, and then imagine what it was like to be there in person.

THE KINDNESS OF FRIENDS
This show was the first place I’ve ever taken a cane with me to help walking around. I spent decades as a runner in an effort to battle my weight, eventually pounding a rotten ankle to scar tissue and arthritic flinders. The other leg has a bad knee. Walking a few blocks or standing for a time is no longer easy any more.

I thought the cane would help. It did, but not enough. Friends and fans took up the slack.

Foremost, Tina and Jason Rak really stepped up to the plate. I first met them on a Magic tour in 1995, and Jason has never lost his deer-in-the-headlights expression around artists. They even took it with good humor when we lost our collective minds searching my Showcase booth for a painting we were certain was there, but which was nowhere to be found. (We had been looking at pictures of my work on Tina’s phone earlier, and somehow this translated to “I know I saw it here today!” It was, in fact, back home.)

I crossed paths with Josh Newberry early in the show, and he and his companions checked in with me early and often. Tony Manion saved my bacon by giving me a satchel in place of the one I’d forgotten to pack. At the end of the show, Seth Polansky, Kelley Slagle (the director responsible for the oh-ghawds-go-see-it-naow film Of Dice and Men), and Brian Stillman toted boxes of my unsold art up to their hotel room, and over to the Goggleworks for shipping the next day.

I literally could not have managed it alone, and I am deeply grateful to all these people. Next year, I need to make better plans. I’d rather just hang out to enjoy the company and companionship of such friends, and not impose! (But thank you again anyway, all of you.)

THE COMPANY OF LIKE MINDS
I am not especially at ease with other artists. Amanda Palmer’s Fraud Police claw at my confidence. For comparison, I used to attend World Fantasy Con in the 80s and 90s, an unreservedly elistist and writer-focused show. One is surrounded by Very Big Name authors whose fame and ability (both or either) fills our popular imaginations and moves our genre. I could converse with any of them, call the best of them my friends, and feel completely at home in such company.

But around artists? I can’t. I am largely self-taught and I feel like I don’t know enough to be among “real” artists. That I will mispronounce something like giclée or gouache or gesso and come off like a brain-damaged wannabe. I might unknowingly lack basics of design, color theory, value, composition, technique: all things these brilliant folk learned in their first semester of art school (or earlier). In places like Illuxcon, I see how much I lack, with no idea how to fix my shortcomings. I am overwhelmed.

I regret that I believed my mother when she said my dad was a better artist before he took a class. That I turned that into “I’ll never take an art class and that will make me a better artist!” Yeahhh, that worked. Or my older sister who, upon failing to do well in commercial art in college, made sure I knew that if she couldn’t succeed, then my artistic efforts were laughable. Well, of course my drawings were more crude than hers. I was maybe 11 or 12.

I did eventually take some classes after college, but I still feel like that outcast in elementary school, waiting to be mocked by the cool kids because she dresses funny. 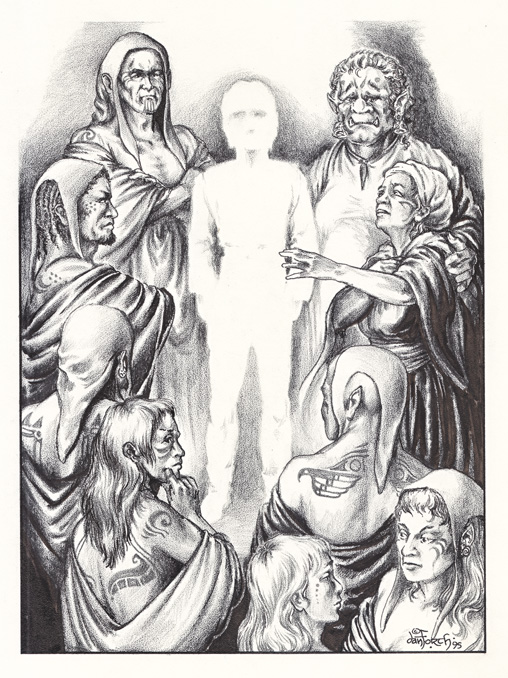 NOT ENTIRELY HOPELESS
So how can I express how shocked I was, that this year I didn’t feel so much the outsider sloping around at the edge of the crowd?

Foremost, the show’s organizers Patrick and Jeannie Wilshire have assembled not just a gathering of extraordinary people but they have done so in a way that has built the best and warmest of communities. The outliers are the venial, the grasping, the wretched, the petty. They’re there, but rare. The artists at the show were overwhelmingly good-natured, kind, sharing people. They love a bad joke and a good drink or a rambling tale, but the environment brought out the best in everyone. From Irish-born Patrick Jones complimenting my blackthorn shillelagh-cane in the bar, to Donato suggesting I try working larger to circumvent problems with my aging eyes, everyone was like the dream of what a family should be (and rarely is).

More than that, other artists came to my Showcase to buy my artwork and tell me how they grew up looking at my pictures in their games. That they had been fans since they were 13. That it was an honor to meet a legend (a horrifyingly scary word), and to thank me for all I’d done.

Me? The weird kid? They didn’t know or didn’t care. 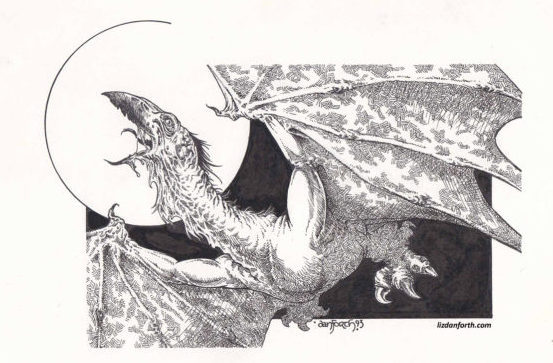 Then I sought them out in the main galleries. Their works were breathtaking. Gorgeous. Everything was skillful, clever, visually brilliant, and I had no. freakin. idea. how they did it. One painting in particular, by Matthew Stewart, made me want to fall on my battered knees and weep for the heartrending, beautiful grief of it.

(As an aside, let me say that his painting appears in the Infected by Art, Volume 4 book we received at the show. While still beautiful, a print of the painting lacks the shattering luminosity of the original. This is what original art has and digital still lacks, and one reason I will continue to produce works in traditional media.)

I can only conclude that those younger artists are all crazy. Or they say these things to everybody because they’re such nice folk. Most likely, I was simply lucky to have had my work in front of them at the right moment in their lives.

I’d like to be the person they think I am. It renews my motivation to set my goals higher, to try harder, to propel my work forward.

BACK TO SCHOOL
I always hear horror stories about conventional art schools, which only reinforces my confirmation bias. My brief time with art classes (a community college no less, long after I’d gotten my bachelors in Anthro) mostly furthered that feeling.

So I wish someone had told me about the SmArt School when it began nine years ago. I heard of it for the first time last weekend. That is exactly what I have desperately needed for decades: brilliant teachers who work in the genre I love, people I would be proud to learn from, and never a sneer for the swords or the galaxyscape or the top third left for a title. I hope to participate this year, in the online version or in the intensive one-week event, or both. It’s coming late, but I hope not too late. Mentoring by such folk as teach there will open my eyes and change my hands in ways I can hardly imagine now.

CONTINUING ON
Last year’s Illuxcon marked a watershed moment for me. It fed my determination to get back to full time freelance come hell or high water. That was a change-in-progress for awhile, to be sure, but by spring of this year, I’d left the library and was headed into the sometimes thankless bowels of full time freelancing again.

I’m also — belatedly, finally, at last — thinking about my own work in a completely different way: not only what I’ve done but what I could do. When people have asked, “Don’t you want to do your own thing?”, I mostly shrugged. Illustrating was my thing, and I put my heart and soul into those works just as ardently as I would something done “for myself.”

But some things clicked this year. I have made observations about myself and my work, noodling and doodling, but I hadn’t figured out what, or how, or where to take the ideas. A panel I attended, and conversations held, opened metaphorical doors in my head, and out tumbled old assumptions that I saw were holding me back. Inspiration grew in the clean air and sunlight.

I am rethinking everything now. How this next year unfolds will tell me if I’m making the right choices when I go back to Illuxcon 10… as I hope and plan to. I’ll try to keep you apprised. Wish me luck!

3 Replies to “Illuxcon IX: A Brain Full of Change”