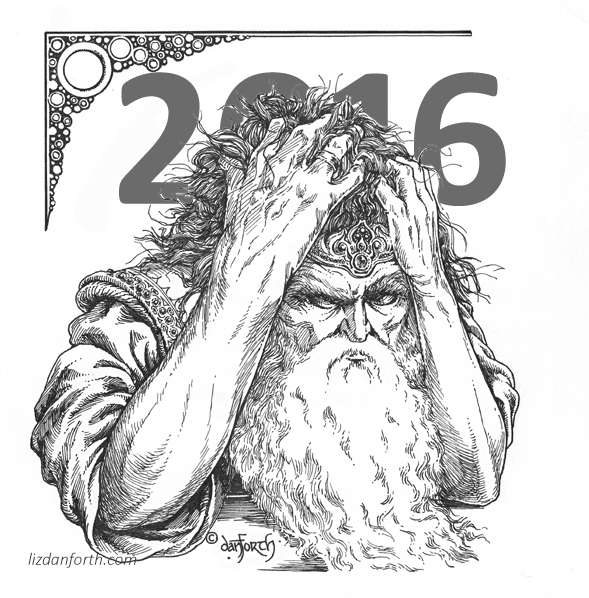 I expect many blogs and articles will start with those words. At the end of an old year and the beginning of a new one, we (humans in general) always look back and forward, no matter what calendrical system we use.

I have a few friends for whom 2016 was (to quote one) “the best year of my life.” They express dismay that their friends can’t wait to see 2016 end, GTFO and don’t let the door hitcha on the way out.

TIME
Time is a very human concept, or at least the demarcation of it is. Consider the twice-yearly arguments about spring forward, fall back! Years are likewise arbitrary demarcations, but I assert they are part of how we grasp our place in time. Our birth year. When we graduated. A wedding. A divorce. A death. Dates are part of the mental metadata.

1066. 1492. Those string of numbers contain a world of information and food for thought to those educated in Western culture.

I doubt 2016 will be remembered as so important a watershed year.

Or rather, I hope it will not.

I have written and rewritten 1000s of words here, trying to write this little blog over the last few months. I am self-censoring endlessly, but with the year ending, I feel compelled to finish something of what I would like to get said. Beggin’ yer pardon, guvn’r, for any holes you stumble in. Mind the gap.

I’m not going to list the losses of the year, celebrity or otherwise. At least one of those celebrities is someone I felt a personal connection to. I have a number of letters written back and forth with Gene Wilder, back in my younger, fanatically fangrrl days. (He was very nice about my lunacy, but that should be no surprise to anyone.)

I prefer action to word on matters political, so I’ll only say that I have expanded my own thinking about the nature of good and evil. The tl,dr version is that actions that propel and enable other people to invest their life-efforts higher up the slopes of Maslow’s Hierarchy are actions I admire. That’s what I want for myself, and perforce the Golden Rule (a core element in every philosophy) dictates I should want to see that available to others.

SELF-ACTUALIZATION
When I left IlluxCon in October, I had firm plans and a concrete vision of what I would undertake in the weeks and months ahead. I understood where I wanted to go with my art and career, what kind of future I wanted to craft for myself in the years that remain to me.

That vision now seems a broken mirror, seven years bad luck ahead. I’m not just talking elections, but a world-straddling hellhound. (I prefer the term Lack Dog to Black Dog, since I have had several well-loved and lovely black dogs in my life. And I lost one this year, amidst the more widely-recognized losses we’ve all seen.)

The beast is both personal and global, and you’ll spray-paint its flanks with whatever grafitti words you fear but which might not be the same things I fear. Make no mistake; it brings fear wherever its drool flies and blood pools up in every pawprint.

I am making other plans.

I’ll work on this website when I can, but I’m not a blogger — I’m an artist who occasionally blogs. (It took far too long for me to realize that.) I’ve put up more pictures into the art gallery not long ago, and I’ll tinker. But I’m not promising to write regularly; not any more. I feel tongue-tied. Choked. Wary.

ART IN PROGRESS
The one thing I can promise is that I will continue to Make Wonderful Things, to the best of my ability. When I am making art, the Lack Dog, the hellhound, and the beast (not all quite the same creature) whine and tuck tail, shrink back, and cower and piss on themselves facing my fire. They are the ones silenced, if only for a little while. 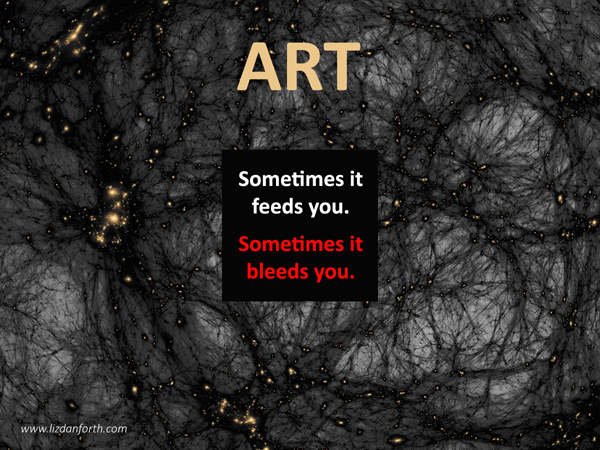 Surrealist and symbolist art isn’t exactly something I’m known for. It is, however, something I do. I rarely show it to others. When I do, it tends to get deeply layered for plausible deniability: “Oh you saw THAT in that? Brrrr, you’re stranger than I am, and I made that picture!”

That may change. (Or not. Watch this space.)

Such artwork falls into the (contested quote attribution) of disturbing the comfortable, and comforting the disturbed. It both disturbs and comforts me, making such images, so make of that what you will. It takes me places I don’t always go willingly, and can’t always extract myself easily. Some days I’m braver than others.

IN THE END
Human history shows recurrent cycles of prosperity and misery, from Golden Ages to Dark Ages, and yet those words describe worlds never so simplistic as the narrative suggests when written after the fact. I am grateful to have lived most of my life in what I consider to be something of a Golden Age, for all the horrors it has encompassed. We have realized a lot of the hopeful science fiction future of my childhood, with many of the good bits despite the manifestly execrable ones. I say that well aware of my privilege and good fortune to have enjoyed it more than others have.

But I think there are no grownups out there right now, real or mythic. No one with meaningful answers to difficult questions. I want to hope we will find some of both. It might happen in a generation, or not for hundreds of years, but tomorrow is tomorrow. For as long as I’m here, I’ll contribute as best I can. For as long as I’m here, I’ll be trying to help others up the hill of Maslow’s Hierarchy.

May 2017 be kind to us all, and better than the least and greatest of our collective fears.