WHEN I LAUNCHED the Mages and Sages project on Patreon three weeks ago, I hoped a few people would be interested in what I proposed: that I wanted to make new art on a theme of the magical and the fantastical, the wise and the wizardly, and I needed help to make that possible.

Two dozen people came forward saying “I am interested. Please do this thing.” That message felt magical in its own right, and I took it to heart. I feel proud and humbled and beholden to every single one of these folks.

After all, it’s one thing to stand up on in a public venue and declare “Hey, I’m a Maker, hear me roar! Rawrr!” (In truth, that’s the essential first stage: faith in myself combined with passion for my work. )

It’s quite another to have others shout “I believe in you! Please Make more!” I don’t know all the individuals supporting me, and few of them in real life. This is scary. It is wonderful. It is magical. And when one of the backers writes the words you see below, telling me why he’s backing my project? This is motivating as hell, let me tell you. 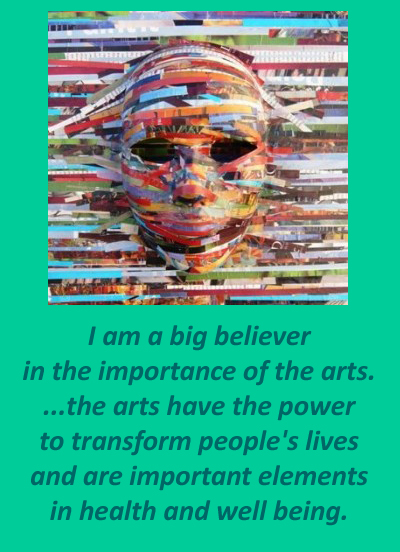 A GLIMPSE BEHIND THE CURTAIN
I am already creating new work because of the Mages and Sages™ project. My patrons get a first look at everything I do related to the project–my first impressions, my nascent ideas. They are the ones who made it possible, after all.

But followers of this blog matter too, whether you’re regular readers or casually curious. I write this post to show off a little of the Mages and Sages work and to talk about coincidentally-related matters.

SKETCHING FROM LIFE
My initial funding goal was to ask for enough to pay for the life-drawing sessions at the Tucson Figurative Art Studio. I draw figures often, and the very concept of “mages and sages” suggests that I’ll be doing a lot more. The backers give me the means to go about once a week, sometimes more. 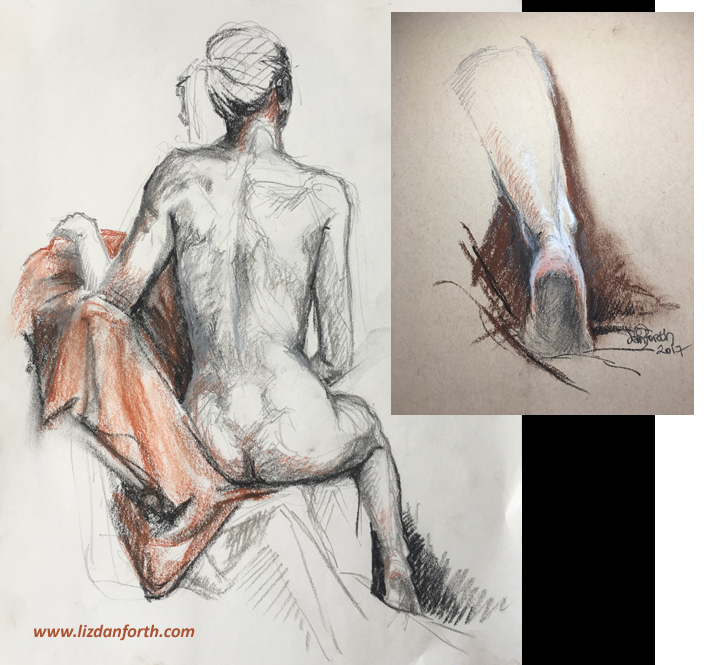 I’m not too bad with anatomy. At university, I studied a lot of physical anthropology and zoology. I could name bones, sex skeletons, and understand why women’s elbows often hyperextended but men’s did not.

But soft tissue — muscle and fat overlying the bones — that’s a different matter. Nothing compares to working with living, breathing models to keep one’s art from drifting into repetitive templates and anatomical shorthand. Studying the human figure becomes something magical, a lifelong journey and a joy.

FACES…
I drew entire figures, hands, feet, knees, ears, and faces; I did gestural pieces and I did detailed studies. Instead of showing you all the sketches I’ve generated so far, I’m going to concentrate on the faces for now. 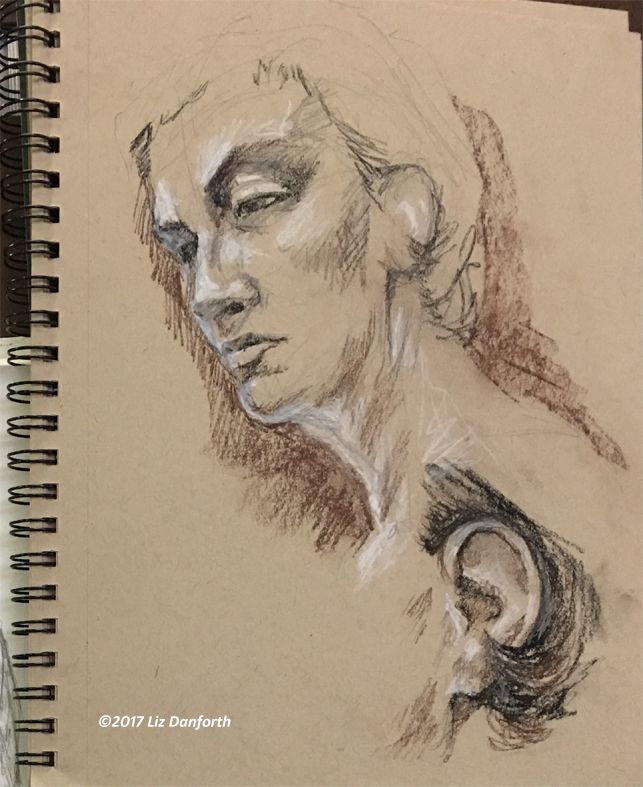 I realized long ago that I am really, really interested in faces. All the studio models to date have been women, either youngish or adults in their prime. In each case, and mostly unconsciously, I exaggerated the elements that make up expression and identity. I knew this would help me remember them better.

Here’s where the story gets more interesting.

…AND BLINDNESS
I suspect that my interest in faces is because I’m at least mildly faceblind. The famous neuroscientist Oliver Sacks wrote about this perceptual disorder in several of his books, most notably The Man Who Mistook His Wife For A Hat. That title really says it all. 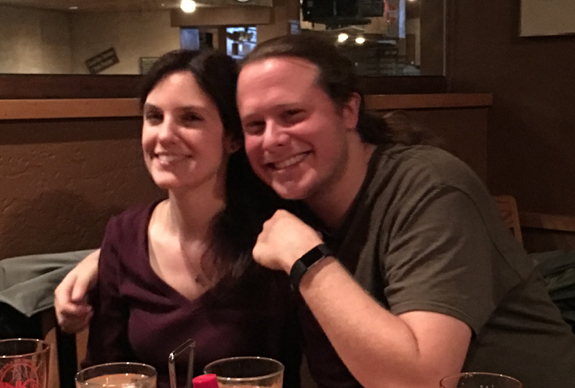 I’m not nearly that afflicted, but recently my suspicions were reinforced after I spent a lively evening in the company of friends. Two I knew well, one less well, one hardly at all in person (though I gamed with him regularly online), and one I’d never met before that night. The most unfamiliar men were to my right and left, so I was seeing them mainly in profile.

The next day, 16 hours later, the same group met up again. This time, both men were across the table from me, their faces straight on. To my embarrassment, when I came to the table I had no idea who they were. They clearly knew me, so I resisted the urge to politely introduce myself. They looked so completely different that I finally identified the man I gamed with by his voice, familiar from Ventrilo (our VoiP of choice) when we raided together. I deduced the identity of the other by context, but struggled to reconcile my two impressions of him into a single identity.

It isn’t age-related; I had to meet my college roommate’s friend half a dozen times over several months before I learned to recognize her. Even then it was mainly through identifying her as “that short person with the thick fisheye lenses.” Short and thick glasses didn’t change. Everything else did. 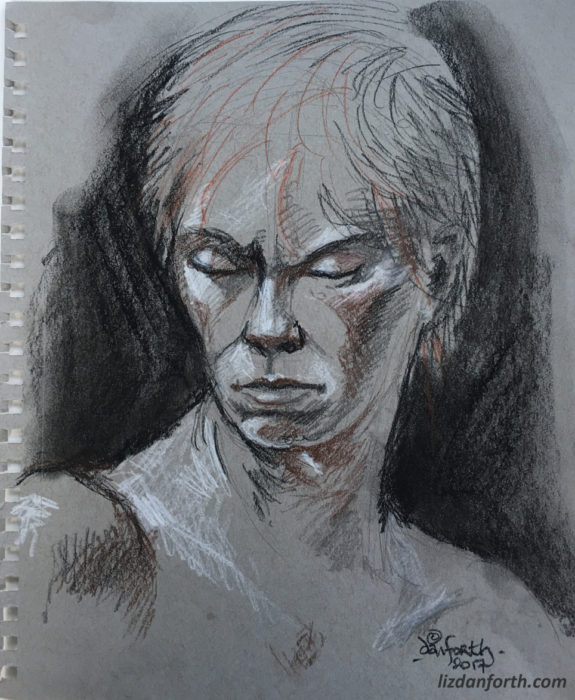 Decades ago, a professional acqaintance I saw a few times a year lost a great deal of weight. I had the surreal experience of a complete stranger greeting me at a convention, and carrying on a lengthy conversation while I struggled to figure out who this person was and how I knew her. Again, I recognized her voice but could not associate it with the individual in front of me. 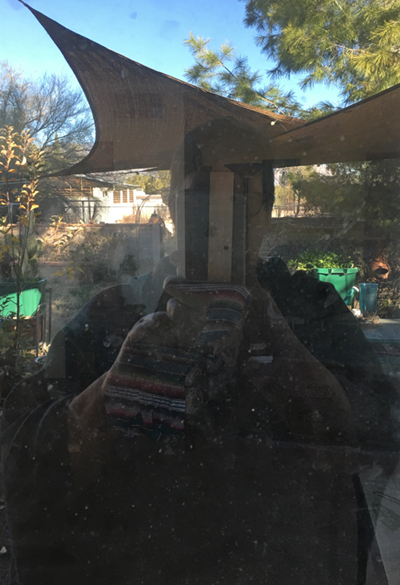 And I have surprised myself, once or twice, walking up to a glass door and thinking someone else is about to walk into me as I approach my reflection. Faces are infinitely variable, even my own.

Admitting this in public assures that unkind teases and trolls of ill intent now have a new game called “Let’s Embarrass Liz!” If so, you’ll be shooting fish in a barrel. I’ll have zero credibility as an eyewitness to anything (although eyewitness accounts are notoriously unreliable even from the most confident of sources). And convention name tags saved my bacon more times than I can count.

A PECULIARITY OF SIGHT
So why am I telling this potentially embarrassing story? What if this moderate faceblindness contributes to who I am as an artist? Doubly so, because I create “characters” who look like real and unique people, with depth and expression in their faces. Is it because I see an infinity of faces, every one of them different?

The flip side of this also accounts for why I don’t do comics despite being asked, even by the likes of Dark Horse. I feel unable to “draw to model”, where you draw the same person repeatedly and the viewer can see it is always the same person. For me, a different angle, different hair, different clothes makes for a uniquely different person.

When I am commissioned to do portraits, I can capture the person’s appearance. But if I did it a second time, it would still correctly look like the person–but it might look nothing like the first picture. Weird, huh? 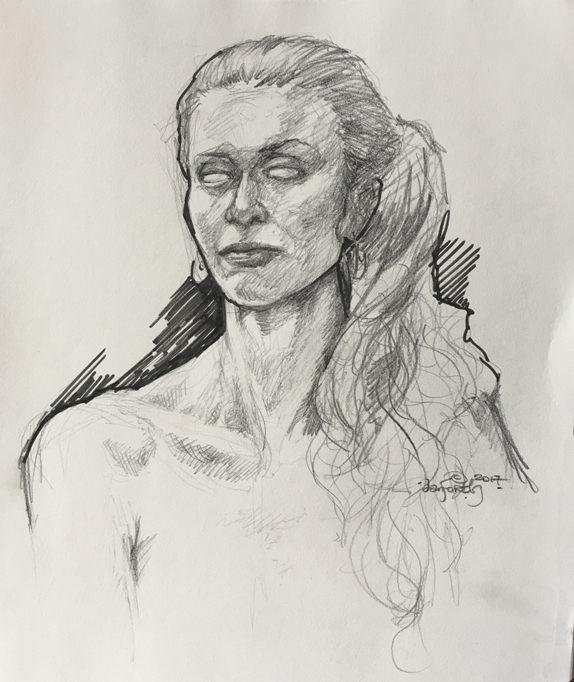 So that comes full circle to the faces I’ve recorded into my memory during those life drawing sessions. Tomorrow, I will be going to sketch from a clothed model, and the artists will all be sitting up close to see and record her hands and face. I will be curious if I do multiple views of her face, how different they could be from each other. When I’m done, I’ll share those sketches with my amazing Patreon supporters.

SPEAKING OF PATREON
I asked my patrons if I could list their names on the website, or if they preferred to remain anonymous. Only a few answered either way. These magical wizards are changing reality, enabling new art to come into existence: Elizabeth Bennefeld, Robert Slaughter, John Harman, Glenda Inscho, and Tom Pugh. I thank them as well as those too shy to be recognized!

I’m hoping that others who enjoy my work will join their ranks. One supporter wrote this to me when he made his pledge:

That assertion of patronage makes me feel like I should be pushing myself ever so much more. I am no Botticelli, no Michaelangelo. The best I have to offer is a promise to be the very best Danforth I can be. Let’s hope that will be enough.