ILLUXCON WAS EVERYTHING I hoped for. I came away inspired in heart and mind, with a renewed determination to be and do the creative work I love. In the process, the show delivered many unanticipated surprises, some good and some not so welcome.

THE ART
Gobsmacked. Awed. Impressed. Inspired and inspiring. Of course!

That’s what the show is all about, after all: the finest artists in the field of imaginative realism* showing off their best works. Huge paintings or small Conte chalk sketches. Tiny sculptures or pieces of furniture. Impressionistic work verging on abstraction, or so believable you could step into the scene if only you had the magic… and so real, the artist made you feel that you had just done so.

THE PEOPLE
I saw old friends and met new ones. The first evening of the show, waiting in line to get my badge, Donato Giancola was hurrying by while setting up his display, but stopped when he saw me, his face alight, and he gave me a huge hug. He’s one of the best people I know, kind and brilliantly talented. Aside from crossing paths at conventions in years long gone, he’d come to Phoenix for an event I’d helped set up at the Phoenix Public Library some 18 years ago. We’d hung out at the house, and he’d sat at my art table or on the floor in front of my bookshelves talking about artists who inspired us, and that evening remains powerful in my memory. I didn’t know if he would have remembered, but he did. His greeting at IXCon made me feel like I’d come home.

I yacked with Armand Cabrera, someone I’d lost touch with except via Facebook. We also go way back, and it was interesting to hear his take on the state of the business. Bob Eggleton too. I got to meet David Thiérrée although despite long conversations, I felt hampered by our language differences. I reconnected briefly with Omar Rayyan. And I spent not nearly enough time with Jeff Menges, who had been instrumental in calming my nerves and advising me in the run-up to the show. There were others, names to conjure with, and I was overwhelmed.

Patrick and Jeannie Wilshire, the show’s inexhaustible organizers, were nothing less than amazing to me. (That link will take you to a discussion of the show and its history. It’s from a couple years ago but still worth reading.) I love them and their great hound Kerberos, who ameliorated my need for a dog fix while I was away from my own beasties. 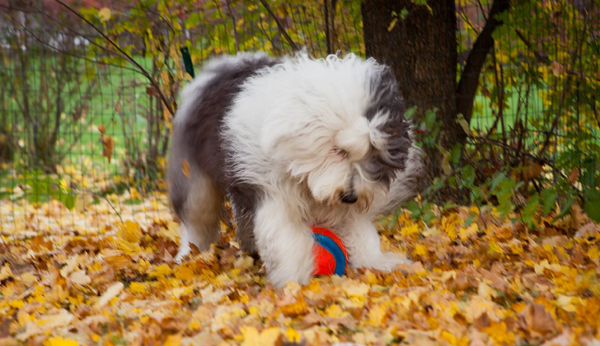 I met with fans and friends and supporters, many of whom I knew only via email. Scott Mosser stands out, with a number of shared meals at the nearby indie brewpub. I think I surprised Jose Peralta Garcia by being able to converse with him in Spanish. I got to meet Brian Stillman and Seth Polansky, and they importuned me to mug on camera for a short interview. And many many others.

I signed 100s of Magic cards, sketched pictures in a few copies of The Gathering art book, and sold a good variety of my originals during the Showcase. My table was cluttered and messy, and I will do things differently if and when I return, but I think folks went away happy with their purchases.

I talked with so many people, and have surely failed to mention some. I was (as the title of this post says) often madly distracted. Or in pain. More on that below.

THE CONSEQUENCES
First, the good stuff. I came away fired up. Driven. Determined. Almost manic. It’s an entirely different experience to see huge original works in the soaring high halls of a museum setting. It’s nothing like peering at prints on art show flats at your local convention.

I had a snapshot of the hall, which seems to have gone missing. If I find it again, I’ll post it. I didn’t take many because photos feel like a secondhand experience. I ate it all with my eyes. (Meanwhile, have a random sketch of a dragon instead.) 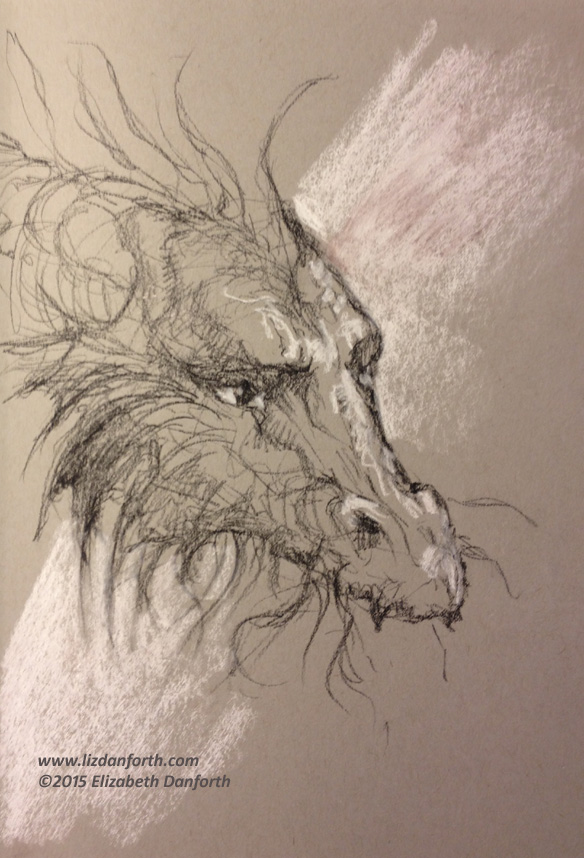 As a business person, it was an education to see others’ presentations, simple and ornate; to see prices, high and low. I’m not the target audience for others’ sales, but I don’t think I ever managed to make sense of it. I attended on a shoestring, and the things I wanted to buy were the artists’ books and videos. I think some could be found at Amazon but few through Interlibrary Loan. I had to be satisfied with business cards and flyers.

Second, the unexpected. Yes, I came away feeling driven, and much of that is about doing more art. But you’d expect that, right?

The unexpected is that some of that drive fired up my desire to write fiction. That spark has been glowing hotter for a while, but this trip blew up the embers into flame. The bellows (to abuse that analogy further) was reading Neil Gaiman’s short story collection “Smoke and Mirrors” which I picked up to read on the plane ride home.** The man is fae-touched, I swear, and his writing seriously messes with my head.

After getting home, I began writing in the mornings, a habit I’d fallen out of. It’s still erratic, but this my first new story in quite a while, and it feels amazing. 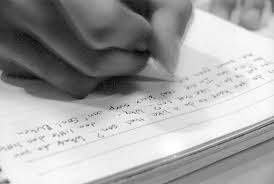 Third, the unwelcome. I’m getting older and was in pain most of the trip despite massive doses of anti-inflamatories and painkillers. The venue was half a mile from the hotel. Walking there and back was… let’s just say “challenging.” Dauntingly so. I didn’t want to pay $11 each way for a cab, at least twice a day for a week, so I slowly shuffled there and back, occasionally stopping to sit. One day I skipped going at all, to let my knee rest.

The doctor expects to replace my knee in the not-too-distant future, and my opposite ankle (also a mass of scar tissue and arthritis from an old injury) gave me fits. I sat down as much as I could. Ultimately, I muddled through.

It’s frustrating. I used to be a runner, and later a walker, as a way to keep my weight at least somewhat under control. That took a toll, as I knew it would. While I’ve gone back to swimming occasionally — that is something I can do, at least — it isn’t enough. I need aggressive amounts of both ridiculously tight diet and exhaustive exercise to get anywhere close to a “healthy” BMI, having been on and off every plan on the planet since I was at least nine years old.*** Dieticians, health coaches, shrinks specializing in weight issues, OCD food tracking, and much more; done ’em all. The more I know, the less I have confidence in. Here too, I muddle through.

THE AFTERMATH
The thing I was most afraid of was to come home and fall into my old habits, patiently tolerating the distracting demands of real life and my part time library work.

I’m working very hard not to let that happen.

After I battled off a wretched bout of con crud, one morning I woke up thinking “I don’t have to do anything for the next four days.” The “anything” referred to appointments, errands, library work time, and other everyday necessities.

Then, like a blast of lightning before my eyes, the thought reversed itself. “I have four whole days to Make Wonderful Things!” complete with capital letters.

MAKING WONDERFUL THINGS
That’s what I’ve been doing. Writing. Painting on a long overdue commission. Sketching just for the hell of it. (That dragon, above, is one example.) Experimenting with making coloring pages. (More on that another time.) I’ve undertaken the editing/development of Larry DiTillio’s long-neglected notes for Darksmoke Level 2, turning it into a new release for Deluxe Tunnels & Trolls.

I’ve done several card alterations including one large one. I don’t want to do alters endlessly, because re-creating something I’ve done in the past isn’t as exciting as doing something brand new, but it’s fun for now. Contact me if you’re interested in things like this, but be aware that it isn’t cheap. 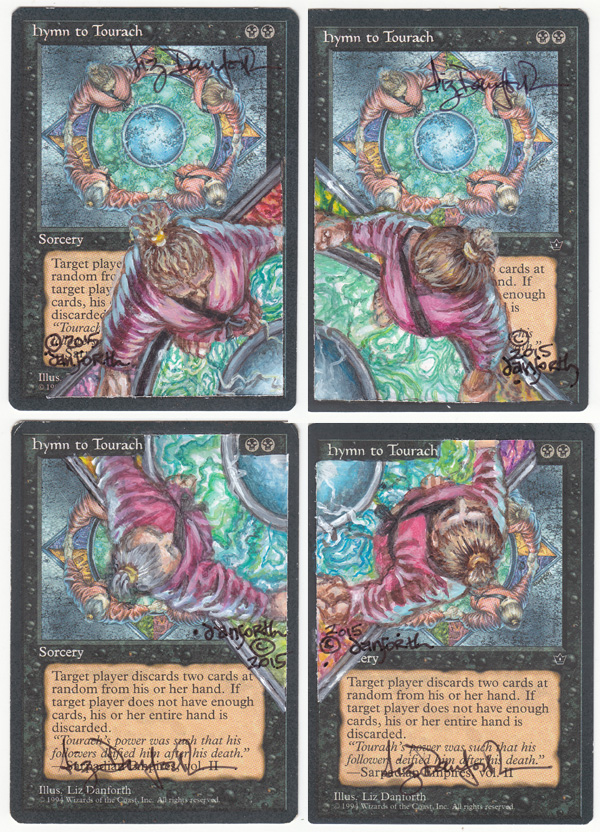 And here are a couple more I did for the same client. These are small, painted on the back of artist proofs of the original cards.

LOOKING FORWARD
In order to keep Making Wonderful Things, I am planning some significant changes in the year ahead. Some I can talk about, some I can’t, and some are dependent on things over which I have limited control right now.

I want to find time to paint… I’d love to do full development of The Summoner, originally done as a black and white drawing for Tunnels & Trolls’ Fifth Edition. I always thought that picture had a lot more potential than I could realize in ink alone. I have several old ink images that I’d like to paint, actually.

The writing… ah, the writing. Illustrated chapbooks, perhaps. The story I’m working on now comes pre-illustrated, as it happens. It spins around an unpublished image I’ve been enthralled with for a long while. Writing a story under it, I exorcize demons and exercise my neglected writing habits. Inspired by a load of lemons, I am making lemonade. Dark, disturbing, bitter lemonade.

I’ve submitted to the jury for next year’s IlluxCon. I can’t honestly say I expect to be selected, because most of those exhibiting in the Main Event are an order of magnitude more accomplished than I am. If not, I will try to make it into the Showcase again. IlluxCon is a special event no matter where one exhibits.

Jack Stanton is encouraging me to go to Magic Grand Prix events in Barcelona, Bologna, and Portland. Jose Peralta Garcia, whom I mentioned above and picture below, thinks I should go to one of the big Magic events he helps to run in Spain next year. I love to travel (pretty much anywhere), and I adore Spain. GenCon? I’d like to return again. But to do any of these requires major shifts in everything presently true about my life.

I think there will be some major changes happening, no matter what. Like IlluxCon, I expect some will be all I could hope for. And they will no doubt come with unanticipated surprises as well. Let’s just hope there are more good surprises than bad ones.

Either way, that’s what I’m going to be working toward. I’ll keep you posted.

NOTES
*Many were what you would identify simply as “fantasy” with swords and magic and heroes and dragons. Many were more futuristic or alternate universe modern-ish.

** I’d finished the books I’d brought with me. No, I don’t own a tablet and the phone is too small for me to read with for long periods. So I’m still in dead tree editions, by and large.)

*** I wrote a letter home to my dad one summer, when my mother and I were driving across country to visit her sister. I found it in my mother’s papers after she died. “I went off my diet today,” I wrote. The date was four months before my 10th birthday.

8 Replies to “Driven to Distraction”