TO MY AMAZEMENT (and perhaps to yours) months have not passed since my last update. It’s not even two full weeks! How long can I maintain this frenetic pace?? Only time will tell.

The last couple of weeks have been full of wonderful things. I have too many things I’d like to share, so let’s just go with the really big news.

TUNNELS & TROLLS GOES MOBILE
On June 30th, VentureBeat carried the exclusive announcement that MetaArcade’s David Reid had partnered with the Fellowship of the Troll to bring Tunnels & Trolls to mobile gaming. Users will get to play, create, and self-publish their own narrative adventures, with iconic T&T material as the initial playable examples and subsequent launchpad.

If you’ve been reading this blog or following me on social media these last few years, you know how important a place T&T has had in my life. It’s one of many such, but it’s where I started in professional art and game design work, it nurtured my writing, and after the Kickstarter from a few years ago, reinvigorated my dedication to a full time creative life.

We’ve been sitting on this MetaArcade news since February, and it was the source of my “watch the skies” comment in the previous post. It’s exciting to see the early reactions to the announcement. Not only are there a lot of people who love T&T today, but there are even more who played it in years gone by and have fond memories of the game despite not having given it a thought for, er, well, decades.

As in, a really really long time. 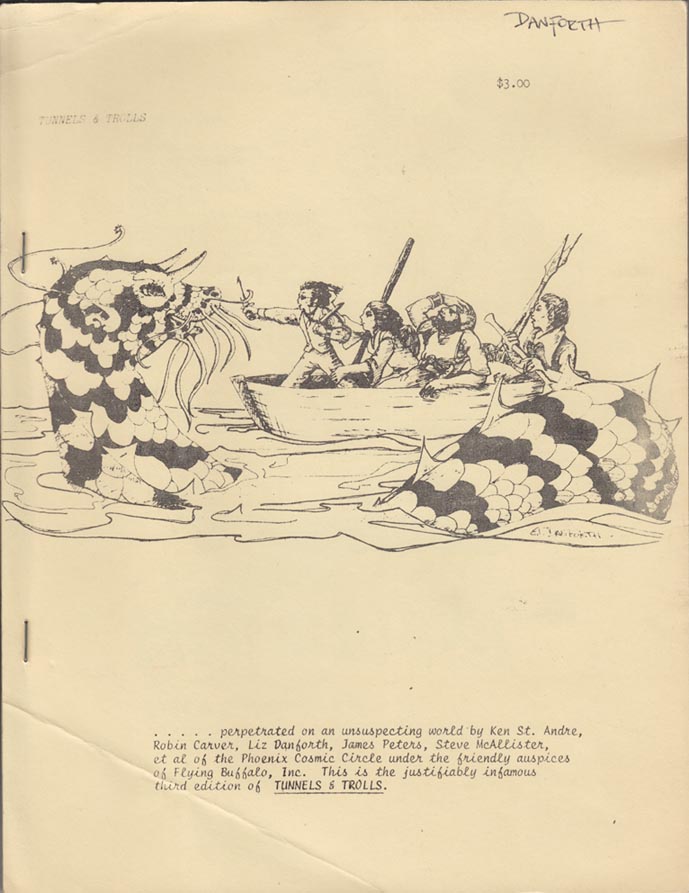 INVITED TO THE PARTY
For months, I’ve been running up and down the freeway between Phoenix and Tucson to secret conclaves of the Fellowship (who all live in the Phoenix metro area), to meet up and work with David and his MetaArcade crew while this project has gotten rolling.

I like long-distance driving but I don’t love that stretch of highway—for all that, it’s been worthwhile every time. It doesn’t hurt that these gatherings give me reason to visit old friends, get to know new ones, and play some games together on the side.

David Reid brings awesome professional chops to this project. I’m enough of an online/computer gamer that when I heard that his CV included Trion Worlds (Rift was one of the few MMOs to have made a serious run at pulling me out of WoW), CCP Games (you might recognize Eve Online), the Xbox gaming platform, NCSoft (I loved Wildstar; another game to have cost Blizzard my monthly upkeep for a little while); and Motiga … I was gawping like a slack-jawed daffodil, no doubt about it.

The thing is, David seems just as delighted to be working with us as we are with him. No joke. He played T&T as a kid, and knows the old solitaire adventures better than I do. On one of his treks to Phoenix, we were all gaming together and it was like he’d always been one of us… but he also exuded a kind of quiet glee of “maybe if I sit here quietly, my heroes will let me stay.” (I’m only exaggerating a little.)

It was a bit unnerving, because I don’t see us that way. The gang of yahoos and ne’er-do-wells who propgated early T&T were just doing fun things because they were fun. I mean, just look at that third edition of the rules! We took fun seriously, but not ourselves and not each other. I’m always a little gobsmacked to learn that our individual and collective weirdness touched other people’s lives and made them happy.

David is honestly a great fellow, and the work he has undertaken with Tunnels & Trolls is absolutely a labor of love, albeit backed by skills and knowledge the rest of the Fellowship can hardly grasp.

WHAT’S UP NEXT
This part makes me a little crazy. There’s a lot coming down the line, but it’s coming a little at a time. I’ve seen early screenshots. I’ve been part of video footage. I’ve worked at the art table. I’ve ***mubledymummble gurkaagghaggle mumblemmmpff*** UNCLE! I can say no more.

Check out MetaArcade’s site and introductory video (also on YouTube) for news as it breaks. Read this blog post and draw your own conclusions about the directions this project might go. Or follow the Deluxe Tunnels & Trolls blog. My posts here on the Oakheart site are likely to lag behind the hottest news (as in this case), and I have personal topics and my own hobbyhorses I still intend to yammer on about.

So until next time… keep watching the skies. There’s so much more to come.